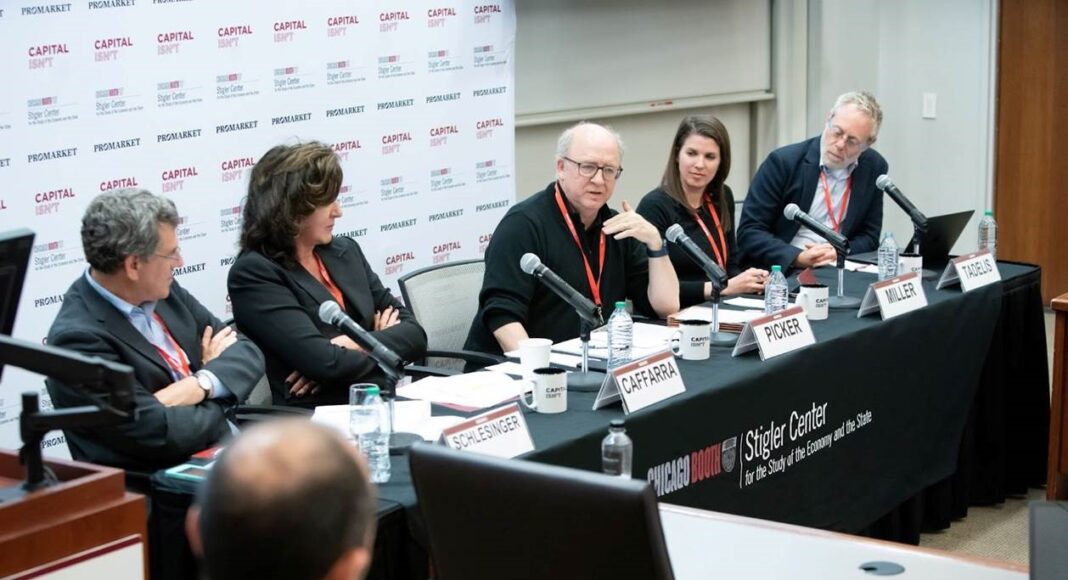 The US stands out among developed economies for its comparatively low level of redistribution as a percentage of GDP. Gustavo de Souza...
Read more
Big Tech

In response to a recent ProMarket post about the Twitter Files, professor Tom Ginsburg points out that the toughest question lies in...
Read more
Research

The Stigler Center, of which ProMarket is a part, recently hosted a panel discussion looking at the antitrust case against Google and discussing potential theories of harm and remedies that enforcers around the world have proposed or implemented.

After a day and a half of discussing larger themes in antitrust policy and taking stock of the last five years in antitrust reform, the Stigler Center’s 2022 antitrust and competition conference moved to its case study portion. The conference dedicated a panel to discuss the anticompetitive conduct of Google, especially in the adtech and search markets, in addition to a separate panel on Facebook.

The moderator of the panel, the Wall Street Journal’s Jacob Schlesinger (a former Stigler Center Journalist in Residence), began with his “disclosures,” demonstrating the pervasiveness of Google in our lives: exchanging emails with the panelists over Gmail, using Google search to study articles on the topic, and Google Maps to get to the conference itself. He also listed the lawsuits recently filed against the company: In October 2020, the Department of Justice, along with 11 states, contested Google’s anticompetitive practices in search. Following this, two state-led lawsuits (Texas and Colorado) also contested “vertical search” practices related to Reviews and Travel, claiming that they disadvantage competitors like Yelp and Kayak, respectively. (Google has denied all these allegations and is contesting them.)

Panelists included Cristina Caffarra, a Senior Consultant at Charles River Associates [note: Caffarra has since left CRA and now heads Keystone Europe]; Sarah Miller, Founder and Executive Director of the American Economic Liberties Project (AELP); Randy Picker, a professor at the University of Chicago Law School who teaches a popular course on Platforms and Network Industries; and Steven Tadelis, an economist, professor, and expert in e-commerce and economics of the internet at the University of California at Berkeley.

To get the audience up to speed with Google’s trajectory, Tadelis took us back to 1998, when the company first launched with “PageRank,” named after its co-founder Larry Page. “Pages started being ranked in a way that seemed to give people what they want [in an internet search],” he said, “and since then, Google has remained dominant.” He pointed out that in the years since, Google has taken several steps to further consolidate its position, despite the occasional legal and regulatory scrutiny: In 2017, the European Commission fined Google $2.8 billion for giving preferential treatment to its own price-comparison shopping service over rival services. Caffara, having worked extensively on this issue in Europe, called it a “landmark judgment” because it confirmed the courts’ beliefs that self-preferencing and discrimination by Google in favor of its own products were not product improvement. She also acknowledged that while Europe has been ahead in proposing regulatory remedies, five years after levying the above fines, the jury is still out whether enforcement has shown results. In the meantime, “Google’s market power crisis and data protection crisis [have] reinforced one another,” she said, echoing what she has previously written in ProMarket. Now, she said, the focus on enforcement has shifted to the US—notable for its “permafrost” antitrust landscape—where it will be some time before cases come to fruition.

Miller said that Google’s actions have educated lawmakers and policymaking elites about the political economy harms of monopoly power. She stressed the need for an aggressive criminal deterrence structure that creates the ability to learn and think differently about lawbreaking that has previously gone unchecked. “We need remedies that can get at the underlying power of a political institution like Google or serve as a deterrent for anticompetitive conduct, including a breakup or holding executives to account,” she said. Picker took the audience back to the introduction of the Sherman Act in 1890 and how its language evolved from when it was first introduced. Sen. Sherman initially focused on joint activity, not single firm activity, and specifically on two things: “things that prevent full and free competition” and “things made with a view to advance the cost to the consumer.” This did not make it to the final bill as we know it now: rather, as Picker explained, that “one of the critical things that might come out of a competitive process is that someone would win–that is a legitimate part of competition, and we have to accept that.” When Google was launched in 1998, it came in offering a better product in search than its competitor AltaVista (and much later, in mobile, than Nokia and Blackberry), Picker said. “The US antitrust system is one based on fault –but the fact that these companies may have been remarkably successful, for reasons that we think are legitimate, doesn’t mean we’re done with regulation. So now what do we do about it?”

Schlesinger pressed the panel to define the theory of harm against Google. Caffara listed a pattern of conducts, among them exclusive dealing, redirection of traffic, and the degradation of rivals’ positions in search results. Picker referenced the vertical search case and its implication that the market should decide which business model is good. Miller mentioned how small businesses have not been able to come forward to talk about the harms they have experienced over time, and the limits on their ability to speak freely and talk privately to regulators. “Google has been able to amass a significant amount of market and political power that has control over the livelihoods of many Americans who depend on Google to reach their customers,” she said. Tadelis brought back the economic focus on the underlying objectives: reducing price, improving quality, and promoting innovation. Is Google’s act of self-preferencing directing consumers to a lower or higher quality product? How do we identify when it is harmful and when it is not? He pointed out that despite privacy concerns emerging from this monopolization over data, people don’t seem to be choosing alternatives such as DuckDuckGo.

Caffara responded that “to protect price, quality, and innovation, we need competition”: Google’s ad-funded business model has concerns with data protection implications that can’t be ignored. Miller said that economic power begets political power, and we cannot limit our discussion just to economic regulation, which is a product of the business model. “Big Tech is engaging in scare tactics with the constituencies that depend on them, and this reinforces the political need for participants to have choices,” she said.

There were other remedies proposed by panelists and the audience alike: Tadelis offered to randomly assign Google or Bing based on odd or even Social Security numbers. Picker suggested that the entire country of France, as an example, should force all its citizens to use Bing for a month. Yale economics professor (and ProMarket advisory board member Fiona Scott Morton), in the audience, suggested divestiture of Android into a separate corporation with a regulated price, based on her previous research. Filippo Lancieri, Stigler Research Fellow and one of the conference co-organizers, offered three proposals: limiting Google as a product to ten Search links at a time, eliminating vertical systems such as Google Flights, or splitting Google into three “Baby Googles” and letting them compete. Caffarra, with the last word on the panel, recognized the promise of separation in terms of ownership and control, especially where there are conflicts of interest (Google Search and Android, or YouTube and the rest of the company, for example). “One could come up with multiple solutions,” she said.