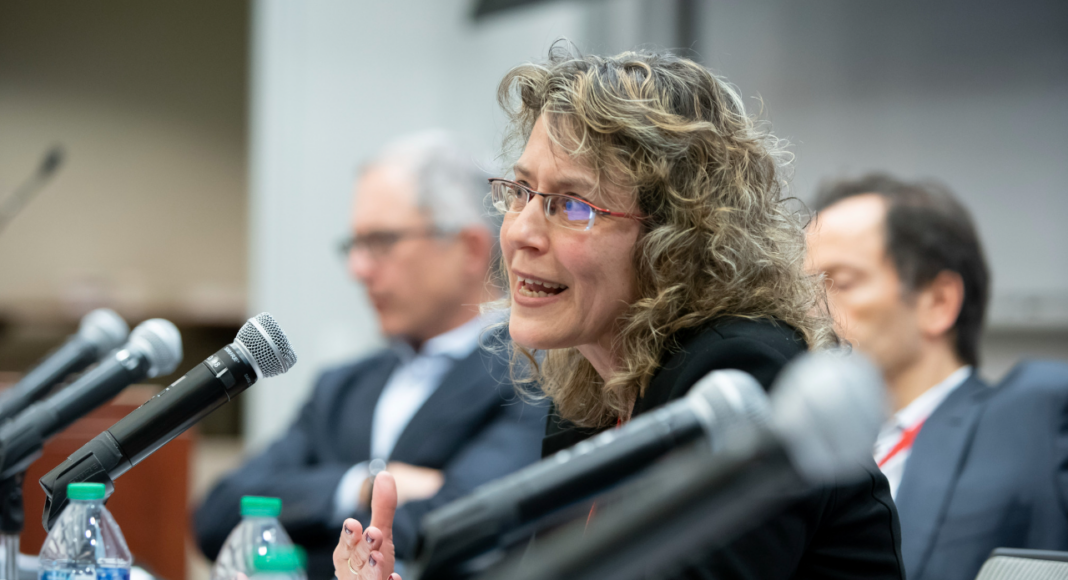 Panelists at the Stigler Center’s recent antitrust conference look at the antitrust case against Facebook and discuss potential theories of harm, as well as the remedies that enforcers around the world have proposed or implemented.

This year’s Stigler Center’s 2022 Antitrust and Competition Conference, which took place in late April this year, looked back over its previous five editions while also looking ahead to what’s next in enforcement. There was one particular corporate behemoth that couldn’t be left out of the conversation: Facebook–a company that has not only seen its strategic focus pivot to the “Metaverse” and name changed to Meta, but also its revenue balloon in size while weathering multiple storms over the last few years, ranging from user privacy concerns to anticompetive behavior, to allegations of fueling genocide and subverting democracy, both in the United States and abroad.

The final panel at this year’s Stigler Center conference took stock of answering several questions regarding Facebook and antitrust: Presuming guilt on Facebook’s part, what is the theory of harm against its practices? What remedies are currently being implemented globally, what are they hoping to achieve, and how likely are they to succeed?

Moderating the panel was Adam Lashinsky, a journalist based in Silicon Valley who has long covered technology and big business. Joining him was an internationally-focused panel, including: Michal Gal bringing in the perspective from Asia and Europe and her expertise in competition policy for small market economies; Nicolas Petit from the European University Institute and his extensive work on technology regulation from across the Atlantic; Matt Stoller, from his US vantage point as the Director of Research at the American Economic Liberties Project; and rounding off the panel, Stigler Center Faculty Director and co-organizer of the conference, Luigi Zingales.

Petit kicked off the panel by laying the groundwork for the most ambitious tech regulation platform proposed yet by any jurisdiction globally: the Digital Markets Act (DMA). Impacting both the “social network” aspect of Facebook (and Instagram) as well as its messaging services of WhatsApp and Messenger, the DMA imposes a broad restraint on combining data across these services and collecting or processing data from third-party services, he said. It will force Facebook to require users to opt-in and provide consent for data collection, and notably does not make it less or more expensive for those who do not consent to provide data versus those who do. The DMA also opens WhatsApp up to interoperability in a bilateral model negotiated between the platform and the interoperator.

However, Petit acknowledged that the complexities of legislating mean that regulation and enforcement will require their own conversations. To step back, it is important to ask: What is the objective of the proposed regulation? To reduce levels of data extraction for users across the internet, reduce the cost of multihoming (having to switch messaging apps between WhatsApp and Signal for different groups of friends, for example), and thus increase competition. In this case, what should be the indicators of success? Does Facebook’s aggressive pivot to the “Metaverse” mean that the focus of its business model shifting away from software and social networking should be considered a win?

Gal had two overarching thoughts: Proposed remedies should reflect what we already know, and that they should take a global perspective–not a local one. While portability of data would create a form of competition, she said it would be a limited remedy, because “each specific user would port a small part of their personal data asynchronously, which doesn’t help create learning and data analysis with economies of scale and scope.” She also said that there is a very strong reliance on consent: while putting the user in the driver’s seat is great for political, moral, and democratic reasons, we don’t know whether it will assist competition. “Finally, we also know from research that users have a privacy paradox: They don’t understand implications of combining their data, contribute to a collective action problem of externalities on other users when they share their own data, don’t always read terms and automatically consent, and have a stronger tendency to provide information to a monopoly.” In this case, her proposed remedy was to create better default consent rules, and on the international angle, for jurisdictions to join forces and thus strengthen the case for structural reform.

Stoller reminded the audience that Facebook has centralized communications and its financing in a historically unique way (via ads) that’s dangerous for democracy–it has killed small newspapers, induced young women to harm themselves, and fostered ethnic conflict. Facebook is more like a government than a business, and it should force us to ask the question: “Are we self-governing or are we governed out of Palo Alto?” He echoed former FTC Commissioner and current director of the Consumer Financial Protection Bureau (CFPB) Rohit Chopra, who has said “FTC orders are not suggestions” – the agency should use its leverage to limit lines of business. If Facebook is found to have violated the False Claims Act or divided the adtech market (with Google) in violation of the Sherman Act, for example, it should be reprimanded as such. Stoller’s proposed remedies are to split up Instagram, WhatsApp, and Facebook, to get away from surveillance advertising, and to block Meta from buying more companies.

Zingales invoked a younger George Stigler, from 1952, who said then that the remedy for trouble with big business is to break it up: [it is] “not only the right thing to do, but the Conservative thing to do” (Stigler said, because regulation is much worse). Zingales said that proposed regulation should be kept simple in order to drum up and maintain public support, with eyes on the practical applications of it. His proposed remedy was to introduce competition in editorial functions of Facebook–to separate its content function from the editing function.

Gal quoted legendary science fiction author Isaac Asimov, who said “Science gathers knowledge faster than society gathers wisdom,” as a guiding force for regulation. Her proposal is to create data exchanges and sharing of non-rivalrous algorithms in a way that is not detrimental to privacy. Petit cautioned that the appeal of simplicity should not drive policymaking efforts, and should look comprehensively at data portability, pricing, and interoperability, to make a determination of harm–“start from a position of ignorance and generate knowledge,” he said. Stoller further suggested invoking violation of consent decrees and criminal charges against the company, and to not rule out private legislation on data privacy.

To close off, Lashinsky challenged the entire premise of the panel in a question to Zingales: Why should Facebook be regulated in the first place? “The problem with monopolies is like the one with mafia bosses: Even if the new one takes over the old one, the problem doesn’t get better, it gets worse,” Zingales said. “And the new one is called TikTok. You learn how to fight Facebook because it teaches you how to fight the even stronger TikTok.”

Lashinsky recognized the point and added context that TikTok is owned by the Chinese. “What a wonderful way to wrap up the panel,” he closed.