If Journalists Want to Save Journalism, They Should Stop Asking Google for Money 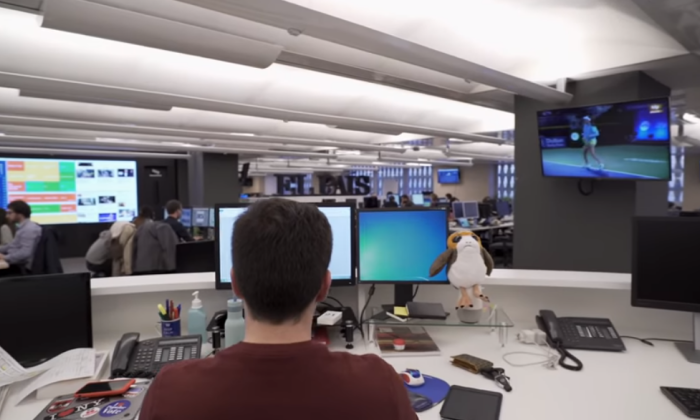 A new report claims Google has been using its Google News Initiative to stage a “media takeover” and reveals the increasing influence of the company on newsrooms.

Politico Europe’s Playbook claims to be “the most reliable political newsletter in Brussels”—a morning must-read for journalists, policymakers, and political junkies. In 2015, Playbook readers noted a surprising small change: The newsletter was now “sponsored by Google.” It is no coincidence that, exactly at that moment, Google was under investigation by the European Commission for breaching antitrust laws. In 2015, the number of Google grants to European media suddenly spiked—from almost zero to more than 260.

Despite these efforts, Google is losing its European war: The EU Commission fined the company in 2017 with a record sanction of €2.42 billion for abusing its dominance as a search engine, in 2018 with €4.34 billion for illegal practices regarding Android, and in 2019 with €1.49 billion for restrictive clauses in contracts with third-party websites. Today, Google’s battlefield is the United States: Presidential candidate Elizabeth Warren, among many others, is advocating for the breakup of Big Tech to reduce its market power and its influence on regulators and smaller competitors.

Google is not simply one of the most powerful lobbies in Washington, with its $6.7 million annual lobbying budget. The tech company has a direct influence on media through its “Google News Initiative,” whose declared purpose is “to work with the news industry to help journalism thrive in the digital age.” According to a new report released by the Google Transparency Project, a non-profit watchdog, Google has been using its grant program to realize “a media takeover.” The report argues that the search engine behemoth “has established a presence in newsrooms throughout the world in a way that appears to have few, if any, precedents.”

As a recent Stigler Center report noted, journalism is struggling to cope with the digital age: Since 2004, 1,800 newspapers have closed in the United States. Six percent of US counties currently have no newspapers, and an additional 46 percent have only one newspaper, usually a weekly. Over one-half of counties are not served by a daily newspaper. A similar trend is seen in democracies like Australia, where the number of journalists in traditional print industries fell by 20 percent from 2014 to 2017; and, among regional publishers and broadcasters, cost-reduction measures range from the closure of newspapers to the consolidation of broadcasting operations. Similarly, in the UK, 321 local presses have seen closure in the last ten years.

Google is part of the problem, but it pretends to be part of the solution as well. For many years, for example, Google forced news providers to adopt its “one-click free policy”: providing free content in order to appear in its search engine. At the same time, Google also competes directly with media groups for digital advertisements.

Google has simultaneously become journalists’ worst enemy and publishers’ best friend. “No company has done more to fund and support journalism over the past decade than Google. It is almost impossible to attend a news conference, hear about experimentation in newsrooms, or even look at journalism research without seeing Google’s name on the funding credits,” the Columbia Journalism Review wrote in a recent piece.

The Google Transparency Project collected all the available information on 16 different Google programs and related organizations to fund journalism. The report reveals that Google and related entities have committed between $567 million and $569 million to support at least 1,157 projects around the globe. The analysis also identified at least 170 projects supported by Google for which no transparent information on the funding’s origin was available.

In 2018, the company announced its Google Digital Initiative, a three year, $300 million effort “to help journalism thrive in a digital age.” Its focus is primarily the United States, where Big Tech’s excessive power is becoming a central issue for the 2020 presidential campaign.

Google is not simply helping local newspapers struggling with the sudden death of the classified advertisement business and the limited number of paying subscribers. The company’s finance efforts are also directed to influential think tanks and non-profit organizations that shape the narrative regarding the challenges the whole media sector is facing.

The biggest beneficiary of Google grants is by far the Reuters Institute for the Study of Journalism at Oxford University, which received £5.5 million over five years. Google is listed as the first sponsor on the Institute’s annual Digital News Report’s website. Google also supports the European Journalism Centre in Brussels, a non-profit institution that offers free-of-charge seminars in Brussels for journalists from all over Europe. On the EJC’s website, Google is listed only under the ambiguous label of “global partner.”

In Europe, Google has concentrated its efforts in two pivotal countries where public opinion is most sensitive to Big Tech’s excessive influence: France and Germany. In 2013, after blunt criticism by the French media for its harmful impact on the advertisement industry and for unauthorized aggregation of contents through Google News, Google launched an initiative to provide €60 million to the French news industry. Among the biggest beneficiaries were two respected traditional newspapers, Le Figaro and Le Monde.

In 2013, Germany passed a law that grants publishers the right to charge search engines for reproducing contents. In 2014, Chancellor Angela Merkel appointed Günther Oettinger as EU Commissioner for Digital Economy and Society. It is no coincidence that Germany has since become the greatest beneficiary, in terms of the number of grants, from the Google Digital Initiative, with 92 projects.

Google does not usually ask grant beneficiaries for any specific payback. However, as every journalist knows from her newsroom experience, money always buys influence. For media outlets, Google is not only a competitor (in the advertisement business segment), but it is also a service provider that can read all journalists’ emails thanks to Gmail, and a generous philanthropist that supports digital evolution. Generosity usually comes with a price.

The Google Transparency Project exhibits a June 2018 e-mail from Madhav Chinnappa, Director of News Ecosystem Development at Google, to undisclosed recipients in the publishing industry. In his message, Chinnappa asks Google Digital Initiative’s “friends” to “consider contacting” European Parliament members of the JURI Committee, where the Copyright Directive—a Google top priority—was being debated. We do not know if the publishers did what Google was asking. However, the European Parliament approved the directive in April 2019, and a few weeks ago Google announced that it will not respect one of its core prescriptions: remunerating content creators.

“Facebook, Apple, and Google do things that journalists should be investigating, not profiting from,” argues Emily Bell, Director at the Tow Center for Digital Journalism at Columbia University’s Graduate School of Journalism. It is no big surprise that the Google Transparency Project report hardly received any media coverage, with the exception of BuzzFeed. Nevertheless, a bunch of tech websites raised (legitimate) doubts on the transparency of the Transparency Project itself, noting that the watchdog organization does not disclose its funders.

However, the Google Transparency Project does offer a useful tip to reporters, editors, and publishers who want to save their business model and preserve the civic role of journalism: Stop asking Google for money, and write more stories on how its power distorts public debate and threatens market integrity.