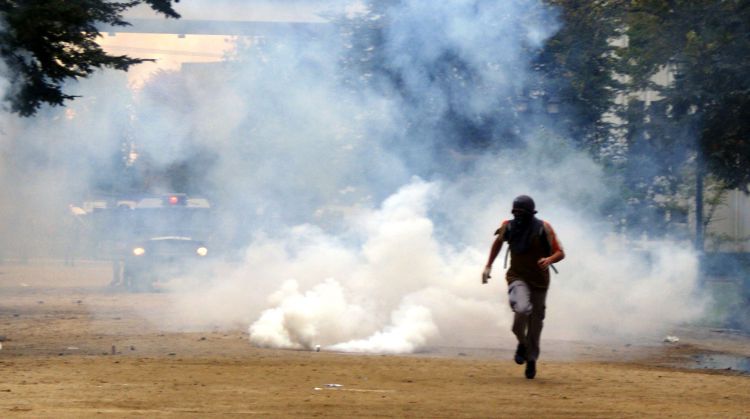 The signals of unrest in Chile mounted for years amid corruption scandals, rising inequality, and new monopolies. The fare increase on public transport that sparked the protests was only the final straw.

“Chile looks like an oasis because we have stable democracy, the economy is growing, we are creating jobs, we are improving salaries and we are keeping macroeconomic balance,” said Chile’s center-right president, Sebastián Piñera, in an interview with the Financial Times last week.

The day after the interview was published, Chile’s capital, Santiago, was under fire, and Piñera declared a state of emergency because of political unrest for the first time since 1987, when Pinochet’s dictatorship was in power.

Today, the vast majority of the country is under military command, with a night curfew and Army forces patrolling the cities—an ominous sight for a country traumatized by military-led, widespread violation of human rights during the Pinochet era.

At least 11 people have been killed, more than 70 metro stations have been burned or attacked, and violent groups have looted and set fire to dozens of supermarkets and other businesses. President Piñera declared that the country “is at war against a violent enemy.”

So, how did we pass from oasis to “war” in just a few days?

The “oasis” idea matched Chile’s external image. Chile’s economy is considered the most open in the world, the country has the highest GDP in South America ($25,978 PPP), and since 1990 poverty has dropped from 38.6 percent to 7.8 percent, turning Chile into a middle-class society with broad access to consumption. Democracy is stable, and, in the post-Pinochet era, every elected President has been able to complete his or her mandate. The country is supposed to host both the APEC and COP25 summits later this year.

But, below this quiet surface, the signals of unrest mounted for years. Since 2011, big protests have erupted against various targets—the unequal education system, privatized social security, and pollution—in different regions of the 2,670 mile-long country.

Political participation is low (49 percent in the last presidential election), and confidence in institutions like Congress and political parties is in the single-digit level.

Several corruption scandals have also erupted since 2014. A fishery law that gave monopoly rights to well-connected tycoons was passed, despite evidence that several Congresspersons received bribes in order to approve it.

Prosecutors revealed that political campaigns were illegally funded by big companies, both for right-wing and left-wing politicians, but the political elite blocked the prosecution of these criminal offenses. Collusions were detected in the drugstore, tissue paper, supermarket, and poultry sectors, but were not penalized because collusion was not considered a crime under Chilean law.

University of Chile scholar Javier Ruiz-Tagle estimates that these and other collusions, tax evasions, and corruption scandals amount to at least $4,982 million in losses for Chilean tax revenues and for consumers.

The impunity of the elite only fuels the rage about Chile’s inequality. Chile has a Gini Index of 47.7—the worst of any APEC country, and higher than any county outside Latin America and Africa. The concentration of wealth is also similar to African countries, with the richest 1 percent of the population capturing 30.5 percent of the total income (and the 543 wealthiest households receiving 10.1 percent of that). In 2012, economist Ramon Lopez calculated that the five richest men in Chile, according to Forbes (including President Piñera), have the same income as the lowest-earning 5 million Chileans.

Crony capitalism is partially to blame. While economic liberalization did open many economic areas to competition, it also concentrated money among a small group of well-connected magnates. Since then, pro-business ideas have been used by powerful corporate groups, born under Pinochet’s regime, in order to protect their rents and avoid competition.

Extreme economic concentration makes competition an illusion in some markets, and monopolies abound: The beer, tobacco, and domestic air travel markets are each dominated by a single company (with 87 percent, 95 percent, and 74 percent market shares, respectively). And these are just three examples among many; according to the pro-free-market think tank Horizontal, Chileans spend 40 percent of their income in markets without any real competition.

This situation makes everyday life tough for many Chileans. The median wage is 400,000 CLP (Chilean pesos). That means that half of all workers are making $550 or less every month, and the replacement rate for pensions is only 31 percent. In 2019, the price of electric power increased by 19 percent, despite huge decreases in electric generation costs. Part of the explanation is that the private electric companies have a monopoly position and a law-mandated profit of 10 percent. The same thing happens with water monopoly companies. The biggest of them, Aguas Andinas, had a profit margin of 19 percent in 2013.

Finally, a public transport fare increase was the last straw. On October 6, the cost of a rush-hour subway ride grew from 800CLP to 830 (from $1.10 to $1.14). Those 4 cents were too much, considering that the average worker is spending as much as 30 percent of his income on transportation. Plus, the fares were already high compared with 47 cents for a metro ticket in Buenos Aires or 45 cents in Lima, the other capitals in Chile’s “neighborhood.”

Some students jumped subway turnstiles to protest what was the second fare increase this year. The government reacted with frivolity. The Economy Minister recommended that workers wake up earlier to avoid the rush-hour price. The Finance Minister said that, even though some prices were rising, there was still good news “for the romantics” because the cost of flowers was falling.

On October 18, the “jumping” protest turned violent. That night, demonstrators set fire to dozens of subway stations, banks, buses, and the headquarters of the electricity provider, Enel. While the city was on fire, President Piñera was photographed celebrating his grandchild’s birthday in an Italian pizzeria in the upscale neighborhood of Vitacura. The restaurant’s name was “Romania”—a coincidence that is reminiscent of Nero.

Later that night, Piñera went back to the presidential palace and declared a state of emergency. On October 19, he promised to freeze the subway fare increase. But it was too little, too late. As one of the demonstrators’ cheers said: “it’s not for 30 pesos, it’s for 30 years,” referring to the disappointments of 30 years of democracy.

As I write this article, Santiago is in its third night under curfew, massive protests erupt in the streets, and the government hasn’t proposed any additional measures to satisfy the social malaise.

In the FT interview, as unrest was brewing in the streets, Piñera proudly declared himself deaf to populism, comparing himself to a classical mythological hero. “Ulysses tied himself to a ship’s mast and put pieces of wax in his ears to avoid falling for the siren calls. We are ready to do everything to not fall into populism, into demagoguery.”
It seems that the wax in his ears prevents him from hearing the cry of the Chilean people, too.

Share
Facebook
Twitter
Email
Previous articleHow the “Watergate Babies” Released the Beast of Monopoly Upon America
Next articleIf Journalists Want to Save Journalism, They Should Stop Asking Google for Money