George Stigler and How Freshwater Economics Won the Day 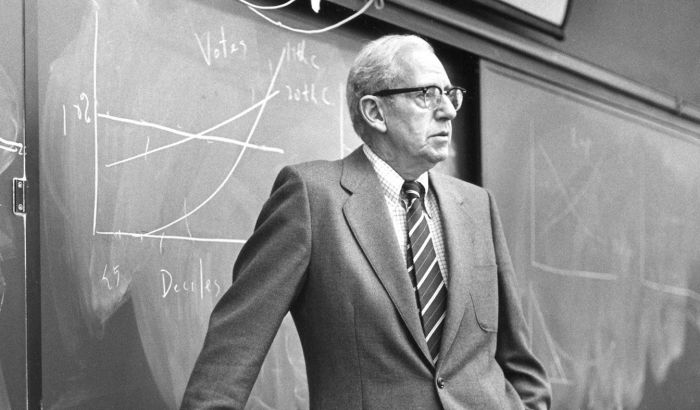 Colleagues and protégés reminisce about the late George Stigler and his impact on the development of economic thought.

Since they first rose to mainstream prominence in the 1980s, the tenets of the Chicago School have become sacrosanct in the eyes of many economists in the United States and abroad. The University of Chicago has produced 29 Nobel prize winners in economics since 1969, the last of which is 2017’s recipient, Booth School of Business professor Richard Thaler. Once an outlier, Chicago is now firmly within the economics establishment, as Chicago Booth professor emeritus Sam Peltzman recently said during a Stigler Center conference dedicated to the memory of George Stigler, his longtime colleague and mentor.

Given the outsized influence Chicago economists have had on economic policy and research in the last 40 years, it’s easy to forget just how far-fetched such a notion would have sounded in the 1960s and 1970s, back when “saltwater” and “freshwater” economists fought over the role that government should play in a free-market system.

“The world in those days was bifurcated between a liberal East coast and Chicago and maybe UCLA as conservative bastions,” said Booth professor and Nobel prizewinning economist Eugene Fama during the conference. “It was an unhealthy situation,” he added.

Peltzman, who arrived at Chicago in the early 1960s, shared his experiences as a graduate student of Stigler (Stigler’s “only graduate student” at the time, he stressed). The University of Chicago, he noted, was different from other economics departments at the time. For one, graduate students were encouraged to “keep it simple”: that is, focus on simple models and try to build on them.

“As a graduate student from Chicago, you were a different product from what the rest of the world was evolving towards,” he said. “We reacted to it in different ways. Some of us carried a chip on our shoulders, [thinking] we can conquer the world with a simple model. Others, I don’t want to mention names, were kind of in awe of the rest of the world and changed the world, too, but in a much different direction.”

Things, of course, have changed since then, largely due to the contributions of Stigler himself, a brilliant economic theorist and somewhat of an anomaly among his Chicago peers. “George said to me one day, in contrasting himself to Milton [Friedman], ‘Milton wants to change the world, I only want to understand it.’ I think it really spoke to George’s view of himself as a scholar,’” said Topel. “He didn’t want to form policy and he didn’t even want to inform policy. He just wanted to understand it, and that’s how he ran the Stigler Center. He would be uncomfortable with the current emphasis on media and the marketing of our research output.” (Founded by Stigler himself as the Center for the Study of the Economy and the State in 1977, the center was renamed in his memory after he passed away in 1991.)

Unlike Friedman the “evangelical,” added Topel, Stigler was more of an “anthropologist” with little interest in influencing policymakers or becoming one himself. At a press briefing following a meeting with President Reagan shortly after he won the Nobel in 1982, Stigler famously remarked that the economy was in a “depression” and that if he had been Reagan’s economics professor, he would have given the president an “incomplete.” When asked what he thought of trickle-down/supply-side economics—the bedrock of Reaganomics—Stigler called it “a gimmick.” Shortly thereafter, he was booted offstage.

“He practically had nothing to do with the whole world of policy. He never actually made statements to the press,” said Friedland. “He had a column in BusinessWeek for a while. He said outrageous things, like ‘What’s wrong with using insider information?’ After a year he quit—he said he didn’t care to continue because nobody complained about what he said. He wanted to start a dialogue and fight with people and debate with them.” After the 1987 Black Monday stock market crash, a reporter called Stigler requesting a comment. Stigler quipped: “I would not comment on that which I have lost so much money.”

He could also be fiercely independent in his views. Friedland recalled a debate between Stigler and Friedrich Hayek over welfare capitalism. Hayek believed even a little bit of welfare capitalism would eventually lead to a totalitarian, Soviet-like regime. Stigler disagreed. “To paraphrase, George said we already have a great deal of welfare capitalism and nothing seems to have been destroyed. We still have a great economy and a great political system which gives consumers the opportunity to express themselves, both through their purchasing and also through their electoral behavior, and they seem to be satisfied. Maybe there isn’t a slippery slope.” The debate between the two continued up until Stigler’s death in December 1991. Hayek followed suit a few months later.

Known for his wit and harsh candor, Stigler was at the center of Chicago’s burgeoning intellectual community thanks to his famed Industrial Organization workshop, where criticisms could often be brutal. Every year, said Topel, Stigler would host an end-of year workshop party at his house, where faculty would play charades with phrases he had selected from Adam Smith’s The Wealth of Nations, acting out such famous ideas as “the division of labour, limited by the extent of the market.”

Stigler also proved central to what Shleifer and Petzman call the “great convergence,” whereby Chicago ceased to be an outlier and started setting the tone for the rest of the field. This convergence manifested, among other things, as a newfound emphasis on econometrics and empirics. Stigler, a lifelong advocate for empirical research, played a key role. “On [most issues] Chicago won, for better or for worse. It won completely in macro, it won completely in regulatory economics, it won in many parts of applied economics and labor,” said Shleifer.

Once isolated, said Peltzman, Chicago has become part of the establishment. “And don’t kid yourselves, there is an establishment in the economics profession.”

“[Friedman] was a great economist, but he was even greater as a social thinker,” said Fama. “Everybody treated him as a nut at the time, but a lot of what he wrote in the 70s and 80s has become ordinary accepted wisdom. I think he won lots of battles that he would not have predicted he would win.” Economists, he added, largely agree “that markets work to some extent—they disagree to what extent that is, but opinions coalesce around that general concept.”

Over time, the old divisions within economics disappeared. “I can’t remember the last time somebody gave me a paper that I thought had any particular orientation or that I could tell if [the authors] were liberal or conservative,” Fama observed. “One of the accomplishments of my generation is that we really don’t know the political attitudes of our economists, and it’s irrelevant anyway.”

“By and large, there are a lot less of ideological divisions within the field,” said Shleifer.

While there are clear benefits to emphasizing empirical research, there were costs as well. Peltzman, who retired a decade ago, expressed some reservations about the “forces of specialization and excessive scientism of economics.” While developments in recent decades have generally made economics “a more credible profession,” he said, they also limited somewhat the ability of economists to ask the kind of big questions that preoccupied Stigler and many of his colleagues.

“There is a trade-off between the breadth of the question and the technical sophistication with which you can answer it,” said Peltzman. “Are we asking big questions anymore? Yes and no. Clearly the standards for the answer have increased. I think that’s a positive development, on balance. It also restricts the kind of questions, and that’s a cost you have to weigh against the benefit.”

However, he noted, “this is not simply about the competence of economists getting better and better. We can talk in a high-minded way about methodological issues, but the clear fact is that the rest of the profession was on the left, and we were on the right. There was an evolution over time and a lot of the stupid things of that era have gone away, because there’s also been an ideological convergence—not simply the way people think, but the way they process data and experience the world. I wouldn’t say Chicago won those battles, because I think these battles go on and they ebb and flow, but the isolation of Chicago from a largely left-wing profession, that’s gone away.”