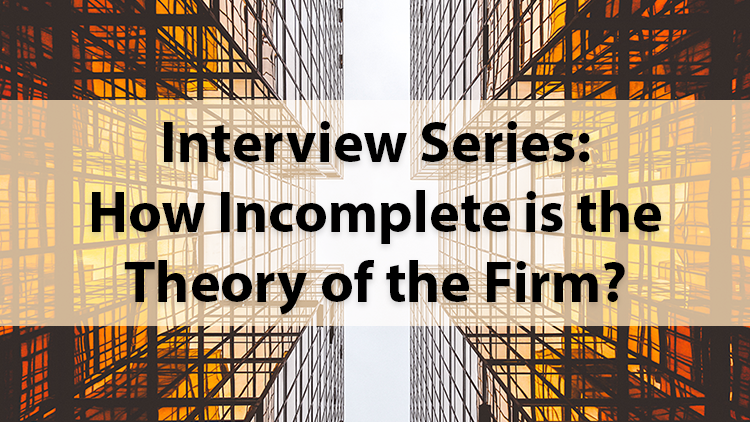 The Citizens United ruling contradicts the Founders, decades of Supreme Court precedent and the will of the American people.
Read more
News

Critics of capitalism claim that the economic system incorrigibly encourages the exploitation of the planet and is thus incompatible with efforts to...
Read more

In this installment of ProMarket’s new interview series, Harvard Business School professor emeritus Joseph Bower shares some thoughts on rent-seeking, politics, and the role of corporations and governments in the market. “The neo-classical model simply does not comprehend the modern corporation.”

On March 3-4, the Stigler Center at the University of Chicago Booth School of Business, along with Harvard Business School and Oxford University, hosted a conference in Chicago to answer the following questions: Should the economic theory of the firm be modified? And if so, how?

The following interview with Harvard Business School professor emeritus Joseph Bower is part of an interview series with influential scholars who are addressing these issues in their work. You can view all previous installments here.

Joseph Bower is the Donald K. David Professor Emeritus at Harvard Business School. He is a leading expert on corporate strategy, organization, and leadership. During his storied career, which spans five decades, Bower has focused his teaching and research on the challenges confronting corporate leaders in a rapidly changing, hyper-competitive environment.

As one of the leaders of a project on The Future of Market Capitalism, Bower co-authored the book Capitalism at Risk: Rethinking the Role of Business (Harvard Business Review Press, 2011) with his HBS colleagues Herman “Dutch” Leonard and Lynn Paine. He has also consulted with many companies in the U.S. and abroad on issues related to succession, strategy and organization.

In a brief interview with ProMarket, Bower shared some thoughts on rent-seeking, politics, and the role of corporations and governments in the market.

There has been extensive writing about the power and scope of corporations going back at least to Edward Mason and Carl Kaysen. In a chapter I wrote,1 I explored the role of large corporations in terms of their impact on factors other than the product market. Echoing Kaysen I emphasized location, employment, product line choices, vendors that because of their scale and scope give firms powers far beyond those conceived in the neo-classical model and unconstrained by traditional notions of price competition. The neo-classical model simply does not comprehend the modern corporation.

But if we are talking about a theory carefully constructed on a set of axioms, the theory really can’t consider political engagements. The essence of the neo-classical theory is the constraint on choice imposed by given and widely shared technology and competitive markets for resources and vendors. Political engagement derives from and is focused on seeking monopolistic power. The various theories of monopolistic competition are instructive but fall far short of the standard sought by neoclassical theory.

Only in a limited way. Both Galbraith (countervailing power) and Raymond Bauer (competition among lobbying powers) note that, to a significant degree, corporate power is less powerful than it would appear. More important is the power of banks, which since the 19th century have played a central role in American life. Trump is closer to Jackson, but whether he will act to cut back the power of financial institutions is doubtful.

Q: The World Economic Forum has called for “reimagining” and “reforming” capitalism. To what extent is this need for reform the result of disruption brought by technological change, globalization, and immigration, and to what extent is it the effect of rent-seeking and regulatory capture?

An important question but almost impossible to attack empirically. Basically, both need attention. The essential weaknesses of capitalism and neo-classical theory are:

Labor is thought to be a resource that prefers leisure to work. When the price of labor is high enough, individuals withhold their effort. But in modern society, work is the source of standing in society, and at higher ends of the market, workers appear to prefer work—almost as an addiction they seek more and more wealth. Try to fit that kind of behavior on a single labor supply curve.

With globalization, prices have really become a problem since different legal systems imply different pricing of all kinds of public goods. These differences are highly significant when it comes to the consequences of trade.

Q: Some people describe Donald Trump’s economic policies as “corporatism.” Are you more worried by Trump’s interferen
ce in the market economy or by companies’ ability to subvert markets’ rules?

We don’t know what will be Trump’s policies. I would say that contemporary Republican policies are corporatist, whatever that means. Trump’s decisions do not flow from policy—they are impulsive and transactional in intent.

Share
Facebook
Twitter
Email
Previous articleDoes Regulation Build Trust or Entrench Cliques? Lessons From Merchant Guilds and the Taxi Industry
Next articleStudy: Women in Finance Are Punished More Severely – Especially When Their Boss Is a Man