Break Up the Police 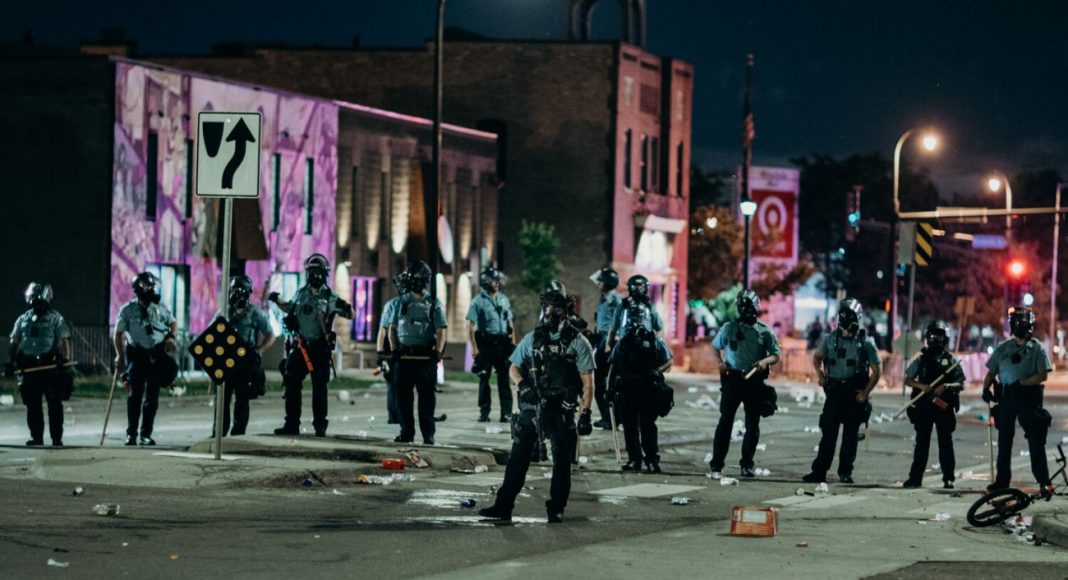 In most cities in America, it is not the police that answers to the mayors, but the mayors to the police. The only solution is to break the police monopoly, as Italy did after World War II.

The murder of George Floyd by Minneapolis police officers has ignited an unprecedented global protest movement against police brutality, which is disproportionately directed towards Black Americans and other people of color. Rather than watching the protest unfold, in many cities the police have responded with even more violence.

In Buffalo (NY), for example, an unarmed 75-year-old man was pushed to the ground and left bleeding by two police officers. We cannot even blame the proverbial few “bad apples,” since they seem to enjoy broad support. The Buffalo police officers who pushed the elderly man, and were charged with second-degree assault, received the cheering support of their fellow police officers outside of the courthouse.

These are scenes from an occupied territory, not from the country that invented the government of the people, by the people, for the people. What is going wrong?

It is tempting to blame President Trump. Certainly, his behavior has not helped; in fact, it seems to be designed to provoke more violence, as even former Secretary of Defense James Mattis acknowledged. But police brutality has been going on long before Trump appeared on the political scene. It is tempting to blame Republicans, but many of the worst police forces are in Democratic-run cities—cities like Chicago, which has had Democratic mayors for the last 89 years. It is also tempting to focus on the racism of the offenders. There is no doubt that individual racism plays a big role. Yet, this is clearly a systemic problem. Good institutional design is meant to attenuate, if not eliminate, the negative effects produced by the presence of racist individuals. As the very declarations of James Mattis attest, the US military has fared relatively better in combatting a culture of racism in its ranks. Why have most police departments across the country failed?

At the cost of playing the stereotypical economist, I think that the answer boils down to: monopoly! According to sociologist Max Weber, the state is the “human community that (successfully) claims the monopoly of the legitimate use of violence within a given territory.”

To prevent abuses of this monopoly power, in democratic states, the use of legal violence is accountable to voters. Most county sheriffs in the United States are elected. In cities, police chiefs are appointed by and respond to their local government, at least in principle. In practice, in most cities the police do not respond to the mayor, but the mayor to the police. Police unions are major donors to mayoral campaigns as well as to campaigns of city council members. And police union members are the most effective campaigners: Even if not intended, the suggestion to vote for a candidate made by a policeman carrying a gun can easily be read as a threat.

The mayor cannot fire police officers, since the union protects them. But the police can easily “fire” a mayor: If a mayor starts to question the police, the police can retaliate by “depolicing” politically sensitive areas of the city, all but ensuring a mayor is not re-elected. Even liberal NYC mayor Bill de Blasio, who initially campaigned on police reform, eventually had to succumb to the power of the police.

In sum, it is not the mayors (i.e., the elected representative of the people) but the police unions that effectively have the monopoly on the legitimate use of violence. It is the worst kind of monopoly because it is sanctioned by the state.

In light of this situation, the demand to defund the police is no longer limited to Black Lives Matter, but has recently been gaining institutional support in many cities. In Los Angeles, Mayor Eric Garcetti announced that he wants to redirect as much as $150 million from the LAPD to social programs. In Minneapolis, City Council President Lisa Bender assembled a veto-proof majority committed to “dismantling policing as we know it.” The best interpretation of this slogan is that it is the liberal version of “starve the beast,” used by conservatives to contain the expansion of government. Yet, as we have seen, the diet imposed on the “beast,” i.e. the state, has been so severe that important state capabilities have been lost. As a result, the United States cannot even confront a pandemic, let alone an enemy attack.

I fear that defunding the police, at least in the most radical version, might have the same effect. In fact, even worse, it might play into the hands of police unions. Supporters of “defunding” the police would like to devolve its role (and money) to community policing. Yet, if community policing proves incapable of dealing with organized crime or gang violence, most citizens will demand more police, not less. The same police officers who were justly vilified for their racism might then be called back with great honors to re-establish order. What is the solution?

The only option is to break the police monopoly. Imagine that every city did not have just one police force, but two or three, with slightly different, but potentially overlapping, tasks. None of these police forces (and none of their respective unions) would have full control of the city. Most importantly, if a red police force misbehaved the mayor could shift power and resources to a blue police force, without fearing lawlessness.

If the idea seems completely impractical, the product of a pin-headed economist, think again: It is exactly what Italy did after World War II. Fearing the return of a military dictatorship, the new Italian Republic created four different police forces with different, but sometimes overlapping, domains. There is the traffic police (“polizia municipale”) that carry guns only for self-defense, not to stop or arrest people; the ordinary police force, which has its own union; the non-unionized military police (“Carabinieri”); and the tax police (“Guardia di Finanza”). This division has caused frictions and inefficiencies, but it has also limited the power of each one of these forces vis-a-vis elected officials and prosecutors. The Carabinieri can investigate and arrest the ordinary police officers, while the Guardia di Finanza can investigate the Carabinieri. The fact that Italy has not experienced a military coup in the last 75 years is also thanks to this division of power.

This is no small feat. If we want to preserve democracy and equal treatment under the law, we have to break up all monopolies, but especially those that bear guns.

Share
Facebook
Twitter
Email
Previous articleAmazon Is Suing a Cloud Employee Who Left for Google, Rekindling the Debate Over Non-Compete Agreements
Next articleDefunding the Police Is Not Nearly Enough