Antitrust and CompetitionMoney in Politics 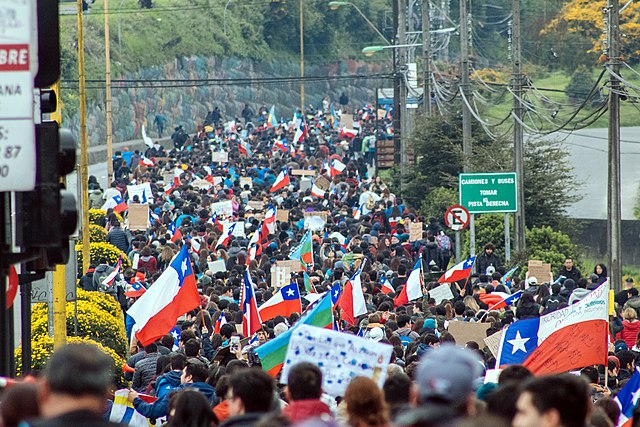 President Piñera’s approval rating has reached a record low, not just for the Chilean democracy, but for all of South America. The rise of new populist forces seems inevitable, but a Bolsonaro-style leader or a Venezuela-type catastrophe are not the only possible outcomes. It is time to use competition to reduce the power of the elite that rules Chile not as a country, but as a “country club.”

Populism is inevitable. The only question is: What form of populism? That was what University of Chicago economist Luigi Zingales [one of the editors of this blog] wrote in 2012. And, with a keen eye from his experience as an Italian, he already anticipated who would become the American Berlusconi: Donald Trump.

Invited by CNN Chile and Chilevisión, Zingales was in Santiago last week when the most prestigious poll in the country, the CEP survey, put numbers to the obvious: The time for populism has also arrived in Chile.

The numbers are devastating. President Piñera’s approval rating reached a record low, not just for the Chilean democracy, but for all of South America. Neither Argentinian President Fernando De la Rúa when he escaped by helicopter from the Casa Rosada, nor Ecuatorian President Abdalá Bucaram when he was dismissed for mental disability, had approval ratings so low. Congress (3 percent) and the political parties (2 percent) are in the margin of error. All politicians fall, and no institution of power is saved: neither churches, nor television, nor private companies.

Of the Chileans surveyed, 72 percent do not identify themselves with the left, center, or the right. The only relevant division today is between a people that defines itself as virtuous and an elite that the populace considers corrupt: populism in its purest form. It is a citizen revolt against the entire ruling class. Today in Chile, populism is inevitable. The only question is: What form of populism?

The answer depends in part on that elite, whose members have hitherto been blind, deaf, and mute. Zingales doesn’t see Chile so much as a “country,” but rather as a “country club” made up of the alumni of nine elite high schools that monopolize the positions of power, concentrated markets, and the “capitalism of friends,” as he calls it—as opposed to the competitive, open, and “popular” capitalism that he defends.

In one of Zingales’s events with politicians and businessmen, it was argued that in Chile capitalism does work for everyone. “How many big businessmen are imprisoned for white-collar crimes?”, Zingales asked. The answer is obvious: If you are a member of the country club, you do not go to jail.

“The problem is not populism, it is elitism,” says Zingales. “If there were not an elite that discriminated against the rest, then there would not be a people who felt opposed to that elite.” But the CEP survey itself shows some solutions.

The “approval” rating of the new Constitution has now reached 67 percent. Since the beginning of the social crisis in October, the number of Chileans who always prefer democracy has grown from 52 percent to 64 percent, and the proportion that asks political leaders to prioritize agreements over their own positions increased from 58 percent to 78 percent.

Those who dreamed of authoritarian outings have received a blow, and the politicians most hurt are those who bet on the confrontation: Communist Party leader Guillermo Teillier, Secretary of Education Marcela Cubillos, President Piñera, and right-wing senator Jacqueline Van Rysselberghe close the ranking.

The only one with more people supporting him than rejecting him (37 percent support and 32 percent rejection) is the mayor of Las Condes Joaquín Lavín, a pragmatic right-wing politician who this week proposed “a new model” which would bring us “closer to Sweden or Holland than to the United States[, …] break the closed club that classifies people by the school in which they studied [, and] move from the export of raw materials to a more complex economy.” Lavín’s words are directly opposed to those of Piñera, for whom a change of model is synonymous with Venezuela. “That is completely wrong,” Zingales responds. “It is by not changing anything, in fact, that the Venezuelan example becomes the only alternative.”

Chile is now set for a political outsider to challenge the incumbents. That outsider might be a more-or-less-harmful comedian, like Zelensky in Ukraine, Morales in Guatemala, or Trump in the United States; a fascist, like Bolsonaro in Brazil or Orban in Hungary; a technocrat who dreams of becoming a dictator like Fujimori in Peru; or a former military like Chavez in Venezuela. “Chile has to choose whether it wants to remain a democracy; and if the answer is yes, it will have to change. If not, a Chavez may look like the savior,” warns Zingales. But the ruling class does not react.

The government proposes that the constitutional convention be chosen with closed lists, in which people can not vote for candidates, just for political parties. Note the absurdity: The president, with a 6 percent approval rate, wants the only alternative to be voting for parties with 2 percent approval rates. The electoral strip excludes 98 percent of Chileans who reject those parties, and formulas that allow independents to be candidates are still pending.

There are political and social urgencies. Pensions, health, education, and salaries are the most important issues for Chileans. Zingales warns that redistribution via taxes has a limit: “It is a zero-sum game. On the other hand, true competition within capitalism generates growth, reduces prices, and also redistributes.” How? Bold measures are needed to break the economic concentration that allows income to be extracted from consumers by charging high prices.

We must separate the industrial sector from the financial sector, tax each layer of the big conglomerates to break them up, divide dominant companies when there are not enough actors in the market, and make the real owners of these businesses transparent. “Competition, competition, competition,” summarizes Zingales. Wasn’t that what capitalism was about, after all?

What form of populism, then? The United States has the virtuous example in the populist movement of Theodore Roosevelt, an elite politician who broke the monopolies, released the energy of capitalism, and strengthened democracy. It is either that, or an unpredictable outsider. Time is up. As Zingales warns: “What does not bend, breaks.”

Daniel Matamala is a Chilean journalist. He works for CNN Chile where he hosts 360 and CNN Prime. He also has a career as an investigative journalist and is the author of six nonfiction books. In 2018, he participated in the Stigler Center’s Journalists in Residence Program. A previous version of this article was published in La Tercera, one of the most important Chilean newspapers.