The Humbling of Mark Zuckerberg 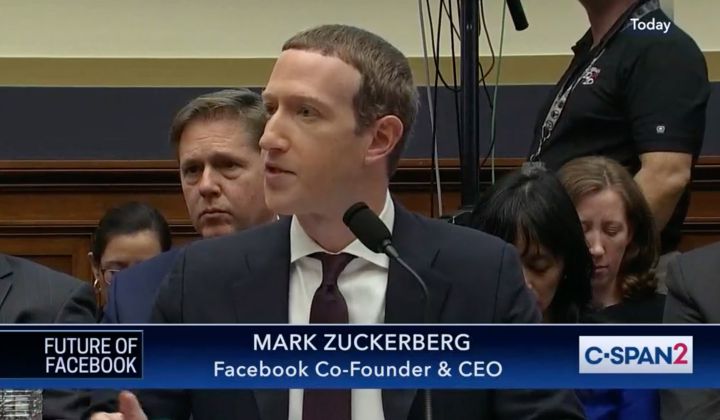 A recently uncovered memo from George Stigler and Richard Posner reveals how they thought about antitrust and merger policy in advising the...
Read more
Antitrust and Competition

In 2019, more than 100 CEOs of US public companies signed a Business Roundtable statement in which they pledged to deliver value...
Read more

Zuckerberg’s Congressional testimony this week illustrated just how much Facebook’s top brass still underestimate the public anger against the company. Congress, however, is still too focused on publicly berating Facebook instead of actually regulating it.

The most viral moment of Mark Zuckerberg’s testimony before the House Financial Services Committee on Wednesday came near the end when, after 5 hours of bipartisan grilling, Zuckerberg faced Rep. Alexandria Ocasio-Cortez (D-NY).

“You announced recently that the official policy of Facebook now allows politicians to pay to spread disinformation in the 2020 elections and in the future, so I just want to know how far I can push this in the next year,” said Cortez. Could she, for instance, buy a targeted ad falsely claiming that Republicans had voted for her Green New Deal? And if so, does this lack of fact-checking on political advertisements not pose a problem?

Zuckerberg, who looked flustered throughout, ultimately answered: “I think lying is bad, and I think if you were to run an ad that had a lie in it, that would be bad.” The exchange was clipped and gained thousands of retweets on Twitter.

“I think lying is bad.”
Is he the CEO of the most powerful company on earth, in terms of reach, or a blathering 6yo?
This kind of ineptitude 3yrs after letting a foreign power subterfuge our election is alarming, unpardonable & unconscionable #Zuckerberg pic.twitter.com/O7SGyV0njg

This was just one of many such moments in which Zuckerberg was bombarded with questions and reprimands regarding Facebook’s seemingly endless succession of errors and controversies. During the hearing, Zuckerberg was asked about Facebook’s “abysmal record” on diversity (Rep. Maxine Waters; D-CA), its failure to curb child pornography (Rep. Ann Wagner; R-MO), its lies to antitrust agencies about keeping WhatsApp separate from Facebook (Rep. Nydia Velázquez; D-NY), its discriminatory advertising policies (Rep. William Lacy Clay; D-MO), its unwillingness to police hate speech (Rep. Rashida Tlaib; D-MI), its complete disregard for user privacy (Rep. Katie Porter; D-CA), and the mental and physical toll of its content-moderation policies (also Porter).

All in all, however, the hearing wasn’t particularly insightful. Unlike Zuckerberg’s previous appearance before Congress, in April 2018, Congresspeople had done their homework. There were no “How do you make money?”-type questions and very little of the “Congrats on all your successes—only in America, right?”-type puffery. The hearing offered moments of genuine interest, such as when Cortez asked Zuckerberg when exactly he first learned about Cambridge Analytica. On the other hand, the 5-minute-per-speaker format isn’t conducive to substantive debate, and lines of questioning that could have led to meaningful discoveries simply faded away with no follow-up. In the end, we came out of this hearing learning only that Washington is angry at Facebook, something which, as The Verge’s Casey Newton noted, we already knew.

Be still my beating heart..@aoc asks Zuckerberg the question. I & others (notably @jason_kint) have been asking for a loooong time. When exactly did he first learn about Cambridge Analytica? Tell me, does this sound like a convincing answer to you?

But the hearing also illustrated just how much Zuckerberg and the rest of Facebook’s top brass still underestimate the public anger against the company. In 2019, there is something absurd about the CEO of an entity as destructive and untrustworthy as Facebook attempting to persuade lawmakers to let him have a go at taking over the international monetary system. As Waters noted during the hearing, while Zuckerberg is asking for regulatory approval to create his own currency, politicians are seriously considering breaking up Facebook. Sen. Elizabeth Warren has “opened up the opportunity,” Waters said, and the discussion “is in the air.”

In his written testimony, Zuckerberg conceded that Facebook faced “a lot of issues over the past few years,” before going on to extoll Libra as a democratizing tool that could alleviate financial under-inclusion. Going into this hearing, he certainly expected some hostility, but also clearly expected to be able to talk more about the benefits of Libra. Owing to his successful showing in his testimony last year, perhaps he thought he could weather the initial storm and then wow Congress with promises to lift the unbanked.

Four years ago, when Washington policymakers were still bullied and enthralled by tech giants, this strategy would have worked like a charm. In 2019, however, anger is palpable, and lawmakers are not so easily enchanted by vague technological innovations from a company currently loathed on both sides of the aisle. During the hearing, Zuckerberg stumbled on practical questions regarding how the Libra Association would operate and be funded, or how Facebook intends to make money off of it. In fact, he offered little in the way of reassurance that Libra—a struggling endeavor that has lost key partners and encountered serious hostility from regulators worldwide—was a still viable enterprise.

Ultimately, Zuckerberg’s latest Congressional appearance offered little more than theatrics. As Matt Stoller noted, yesterday’s hearing, however satisfying in terms of schadenfreude, was far from the three-day grilling Bill Gates endured during the Microsoft hearings in the late 1990s. In the 18 months since the Cambridge Analytica scandal exploded, many have proposed plans on how to address the political and economic power of Facebook and the rest of the tech giants (you can read the Stigler Center’s recommendations here) but so far, Congress is still too focused on berating Facebook instead of wielding its power to constrain it.

What I saw today at the Zuckerberg hearing was not a contentious grilling of a CEO, but a Congress frustrated that the global privacy commissioner is dishonest and accountable to no one.

But the theatrics also matter. Facebook is currently attempting to charm its way into being allowed to replace traditional money by privatizing the international payment system. Publicly dragging it through the mud may not be as effective as regulating it or breaking it up, but keeping a permanent air of toxicity over it is another way of humbling it, reminding its senior executives that before they’re allowed to take over any more of the world, they first need to earn our trust.

Share
Facebook
Twitter
Email
Previous articleVertical Media Mergers Are a Serious Threat to Freedom of Speech
Next articleThe Harvard Admission Lawsuit Decision Does Not Answer the Main Question: What Are Top Universities For?

A new survey of economists by the Initiative on Global Markets indicates that 67 percent agree or strongly agree that the rise...
Read more
Commentary

In an interview with ProMarket, Nobel laureate Oliver Hart explains why broadening our perspective on fiduciary duty beyond maximizing shareholder wealth could...
Read more