DOJ Antitrust Chief Makan Delrahim: “American Antitrust Agencies Likely Have Made More Enforcement Mistakes Than Any of Their Foreign Counterparts” 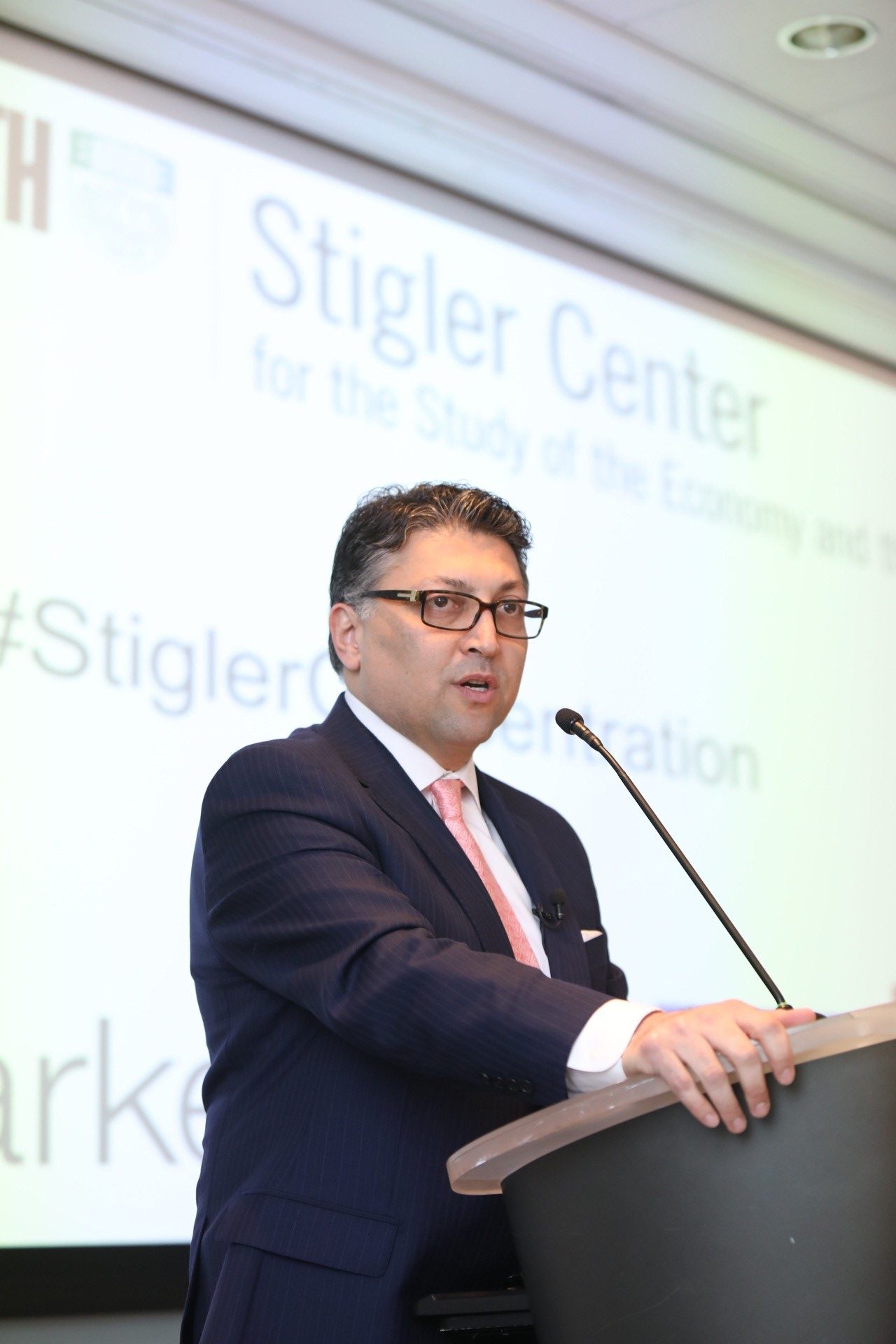 In a keynote address at the Stigler Center’s Antitrust and Competition: Digital Platforms and Concentration conference, the US Department of Justice’s Assistant Attorney General said antitrust enforcers “should be open and receptive to empirical evidence that companies in digital markets may be engaging in predatory pricing or other exclusionary conduct to drive out competition and cause long-run harm to consumers” and said his own thinking on data has changed.

“Looking back over the past hundred years, American antitrust agencies likely have made more enforcement mistakes than any of their foreign counterparts,” said Makan Delrahim, head of the Justice Department’s antitrust division, during a speech at the Stigler Center’s Digital Platforms and Concentration conference in Chicago.

In a lengthy speech in which he expanded on US antitrust policy, the criticisms leveled in recent years by economists and scholars that the lack of vigorous antitrust enforcement has contributed to a dangerous rise in concentration, and emerging threats to competition coming from digital platforms, Delrahim addressed the recent public uproar over personal data privacy in the digital economy and announced the creation of a new “Office of Decree Enforcement,” whose “sole goal” would be to “ensure compliance with and enforcement” of behavioral consent decrees.

On digital platforms, Delrhahim noted the change in public perception of their use of consumer data. “Ten years ago, few of us cared whether social media platform companies had access to our data. We would give up our private data freely in exchange for access to a ‘free’ platform—to connect to friends or stranger,” he said, adding: “Lest we forget, it was not long ago that we were heralding the role of social media as a potent force of political messaging and voter outreach to challenge authoritarian rule throughout much of the Middle East.”

As for the value of consumer data, he said, with “greater understanding of the nature and scope of data collection and sharing, the mentality regarding free platforms may well be changing. I know that for me, it has changed.”

As users of digital platforms become better informed about what’s being done with their private data , said Delrahim, “we may be witnessing a fundamental change in the marketplace,” entering a world “in which a substantial number of consumers view their data as an asset they won’t part with for free. At a basic level, the bargain between platform and user appears to be shifting. At the margins (and with a generational shift), some may opt out of certain networks because they simply don’t see the bargain as working in their favor. Time will tell.”

Recent revelations over the way that digital platforms use and misuse the consumer data they collect, noted Delrahim, was not surprising for “sophisticated followers of these business models.” Whereas once the debate was limited to experts, however, heightened concerns over privacy and the collection of consumer data are “no longer limited to privacy advocates and policymakers who have sounded the alarm for years, only for their concerns to fall on deaf ears.”

How antitrust enforcement agencies should respond to these concerns has been the subject of much debate over the past two years, with critics arguing that the current framework of antitrust enforcement, in which decision-making is exercised solely through the prism of “consumer welfare,” is ill-equipped to deal with the threats posed by digital platforms and new technologies.

In his speech, Delrahim, who was confirmed in September as assistant attorney general for the antitrust division at the Department of Justice, addressed these concerns and defended the so-called “consumer welfare standard,” which he called “the lodestar of antitrust enforcement” and “a humble recognition that antitrust law, if misapplied, can have harmful consequences for those it intends to protect.”

“I am aware that some in this audience believe that existing antitrust laws are ill-equipped to address competition issues that have arisen in the digital platform economy, and that as a result of the antitrust laws’ supposed lack of adaptability more generally, there have been harmful increases in industry concentration, along with a variety of other social ills,” said Delrahim. “Some lay the blame for this state of affairs at the feet of the consumer welfare standard itself. Others blame antitrust enforcers for falling short of taking action against companies or transactions that might harm competition. Enforcers do indeed deserve some blame, particularly for their willingness to settle for ineffective behavioral (or regulatory) fixes to mergers rather than challenging them when necessary. Yet, overall, I have reason for optimism.”

The current “antitrust consensus,” said Delrahim, can be flexible enough to be applied to new business models in digital markets. On claims that antitrust policy has failed to curb the rise of concentration, particularly in tech, Delrahim said that “there is no persuasive evidence that antitrust itself has ‘failed.’” He was similarly skeptical of studies suggesting that concentration has contributed to economic inequality, stagnant wages, and a concentration in political power in the hands of private firms.

As for the purported failings of current US antitrust, Delrahim said that the current antitrust framework “may fall short if enforcement agencies are unwilling to take action, based on credible evidence, against threats to competition and consumers, or—even worse—if they impose behavioral fixes that transform law enforcement agencies into ineffective regulators, where free markets can do a more effective and more honest job.”

When it comes to digital platforms, said Delrahim, the question enforcers should answer is whether consumers who believe that their data is digital currency are facing a monopoly seller or monopsony buyer with structural barriers to competition and entry. “Admittedly, it is a complex question and we need studies and new and innovative thinking.”

Openness to new empirical evidence aside, Delrahim devoted much of his speech to a defense of the consumer welfare standard, which attracted increased scrutiny in recent years, saying that he views “the narrow focus on competition and consumers as a feature, not a bug.”

“Of course,” he added, “enforcers carrying out the antitrust consensus approach are not free from blame. In fact, looking back over the past hundred years, American antitrust agencies likely have made more enforcement mistakes than any of their foreign counterparts.” Thanks to the Chicago School, he said, “a lot of that was corrected.”

Nevertheless, he said, “Despite our efforts to learn from the past, we have recently failed on repeated occasions to address the harm imposed by anticompetitive mergers.” In his speech, Delrahim also criticized regulators who prefer behavioral remedies, saying regulators “may be attracted to behavioral remedies as a convenient way of saving face when clearing politically unpopular mergers.”

When it comes to enforcement, Delrahim stressed the need for “evidence-based” enforcement. “Critics of the consumer welfare standard have their hearts in the right place,” he said, “yet in their rush to grab the pitchforks, critics of the current regime may be forgetting to subject their preferred approach to a hard, evidence-based evaluation of its own.”

In the current environment, he said, “there is an arms race among some enforcers to use the strongest remedies available to combat the perceived problem.” But before enforcers should act, agencies need “a sound body of evidence that dynamic competition will be harmed, such that consumers will suffer in the long-run by the practices we are concerned about.”

He added: “As enforcers who bear the burden of proof, we must demand hard evidence of anticompetitive harm before rushing to condemn as unlawful business practices that fuel innovation and thus dynamic competition.” Delrahim also warned of regulatory capture: “Like other government entities, competition authorities and consumer protection agencies are at risk of regulatory capture. There is a long history of incumbent companies manipulating regulatory schemes to create entry barriers.”

If there is “clear evidence” of harm to competition in digital markets, he said, antitrust enforcers “must take vigorous action and seek a remedy that protects American consumers, so that they don’t bear the risk of failure.”

Share
Facebook
Twitter
Email
Previous articleProMarket Is Live at the 2nd Annual Stigler Center Antitrust and Competition Conference: Digital Platforms and Concentration
Next articleFormer Italian PM and European Competition Commissioner Mario Monti: Why Antitrust Enforcement Is “More Vigorous" in Europe Than in the US