Study: Politicians Vote Against the Will of Their Constituents 35 Percent of the Time 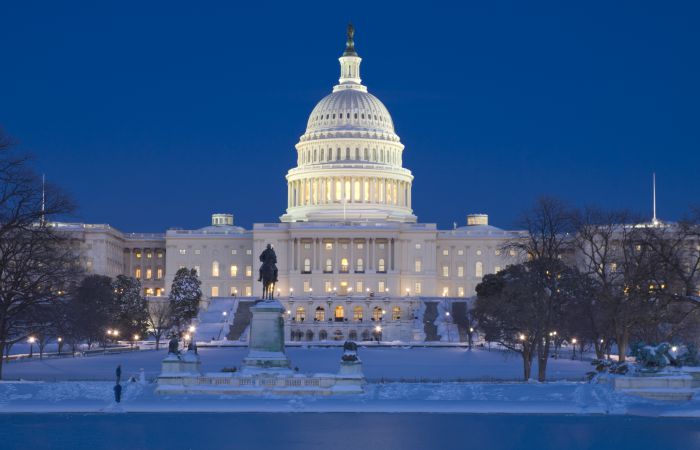 In March, both the House of Representatives and the Senate passed a bill that repealed Obama-era regulations that would have prevented internet providers from storing and selling their customers’ browsing history without their consent.

The bill was passed, and then signed by President Trump, despite being wholly unpopular with the American public: a HuffPost/YouGov poll showed nearly three-fourths of Republicans and Democrats wanted the president to veto it. “This is what’s wrong with Washington D.C.” said late-night host Stephen Colbert, in reference to the bill. “I guarantee you there is not one person, not one voter of any political stripe anywhere in America who asked for this.”

This was not a rare occurrence. Academic studies have long since observed that whether they are influenced by special interests or their own preferences, politicians will often diverge from the will of the electorate. The belief that politicians act according to their own interests once they come into office played a big part in the disillusion and anger that fueled the global crisis of representative democracies and contributed to the rise of Trump. A 2016 Quinnipiac University poll, for instance, showed that 76 percent of Americans agree with the statement “Public officials don’t care much what people like me think.”

The question remains, however, how often legislators really stray from what their constituents want? A number of scholars have already suggested that most Americans have little to no effect over what the government does. In a 2010 paper, John G. Matsusaka of the University of Southern California found that states choose policies that a majority of the public prefers only 59 percent of the time—“only 9 percent more than would have happened with random policymaking.”

In a new Stigler Center working paper, Matsusaka aims to answer the question how often politicians stray and what motivates them to do so by offering a new empirical approach to measuring congruence between public policy and public opinion.

Matsusaka finds that more often than not—65 percent of the time—legislators actually adhere to the will of a majority among their constituents. However, he also finds that when the preference of a politician diverges from that of his constituency, politicians overwhelmingly tend to follow their own interests, beliefs, and ideologies over those of the people they represent.

In order to measure the level of congruence between legislators and their constituents, Matsusaka examined the results of 28 referendums held between 2000 and 2016 in nine states (Alaska, California, Maine, Maryland, Michigan, Ohio, North Dakota, South Dakota, and Washington) that allow citizens to challenge newly-approved state laws through referendums. He then looked at 3,555 roll call votes associated with these referendums in state legislatures. The referendums covered fiscal, political, and social issues, from high-profile issues of national importance like minimum wage and same-sex marriage to more localized issues like the mascot of the University of North Dakota.

What Matsusaka finds is that most of the time, “representation” works: 65 percent of the time, legislators’ votes correlated with the positions of their constituents. While 65 percent “is better than the 50 percent rate of congruence that would occur if legislators simply flipped a coin when voting,” he notes, it is still “less than one might hope.”

Over the years, a number of theories have been proposed in order to explain and mitigate this disconnect between legislators and their constituents. Advocates of campaign finance reform, for instance, argue that campaign contributions are effectively bribes and that their immense growth over the past decade has made legislators more beholden to donors than to voters. Reducing campaign contributions, then, should help make legislators more responsive to public opinion.

Matsusaka, however, finds no evidence that money in itself changes legislative votes. “I actually tried to find evidence of campaign contributions mattering, and I couldn’t find any correlations,” he says. “I can’t find any connection between the amount of the money people raised and their tendency to stray from what the constituency wants.” In trying to figure out what motivates politicians to diverge 35 percent of the time,” he says, “I tried to look if the legislators that are not doing what their constituents want are also the guys that are taking a lot of money—what I find is that there’s no connection in the data.”

This, he says, doesn’t mean that campaign contributions have no effect, just that donors are attracted to candidates that share their values. “There’s no doubt that money matters in the system, the question is why. One story that people have is that it is corrupting, in the sense [that] legislators would rather do something else, but because of the money they pay attention to the donors. I think what the data show is that money matters in a different way. Politicians actually want to do the things the donors want them to do, and donors are just supporting people that share their views. In other words: you might be buying representatives, but you’re not buying votes.”

Other arguments suggest that increased public and media scrutiny would make politicians more responsive, as will more competitive elections. Matsusaka finds no evidence of this, either. “Reformers have a strong belief that the way to make democracy more responsive is to make elections more competitive. Looking at the 35 percent of legislators that vote against constituent opinion, I don’t find that they are from non-competitive districts. In fact, I find almost no relation between electoral competition and legislator responsiveness to public opinion,” he says.

In other words: it’s not necessarily the lack of public scrutiny, the increase in campaign contributions, or uncompetitive elections that make politicians stray from the wishes of their constituents. Ideology, surprisingly, is the factor that impacts congruence the most according to the study.

“I was somewhat surprised that there was so much ideological voting,” says Matsusaka. “The picture that emerges isn’t that politicians are listening carefully to their constituents and figuring out what they want, but that politicians say, ‘here’s what I believe and once I am in office I am going to stop listening to you and do what I think is right.’ This does not cause a complete failure of representation—if you’re a Republican in a Republican district, more often than not you’ll agree with what the voters want—but that is not the way I was originally thinking about how democracy works.”