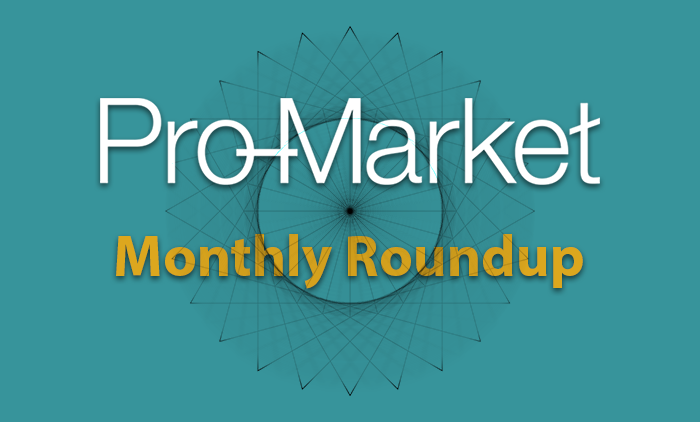 The first edition of our monthly roundup that includes ProMarket posts from the previous month, as well as interesting stories from our “Weekly Briefing” section.

The New York Times on the funding of U.S. think tanks

In August, the New York Times ran a series of investigative reports on the funding of think tanks in the U.S. The series revealed how some corporations funneled money to leading think thanks and in return were provided with access to politicians, regulators and academics. Read more>>

The ProMarket blog covered the issue of special interest groups influencing academia, and sometimes buying academia outright, with a post on the sugar industry and its relationship with scientists and politicians. Read more>>

It seems that companies that are very active in lobbying and political contributions are also attempting to influence science. A recent report by the Transparency Project shed light on the extent of Google’s involvement in funding conferences and academics in the privacy realm. Read more>>

Horizontal shareholding, in which large financial companies have significant stakes in competing companies in the same industry, has been getting more attention in the literature and discourse about antitrust. In a recent post in ProMarket, Martin Schmalz elaborated on his research on this very issue. Read more>>

Einer Elhauge from Harvard Law School thinks that we can attribute some of the rise in inequality to horizontal shareholding. Read more>>

Daniel Crane from the University of Michigan has a very different take. Read more>>

The SEC and revolving doors

Eric Ben-Artzi, a former Deutsche Bank risk officer turned whistleblower, announced last month that he is rejecting an $8.5 million award from the SEC. In an interview with ProMarket, he spoke about revolving doors and the culture in large banks. In a separate post, Adam Waytz from the Kellogg School of Management at Northwestern University explained what motivates whistleblowers. In our Insider Corner column, our source in the banking system shared insights into the corporate culture of investment banking. Read more>>

Share
Facebook
Twitter
Email
Previous article140 Years of Antitrust: Are Brandeisian Pro-Competition and Anti-Monopoly Sentiments Coming Back Into the Political Discourse?
Next articleAre Special Interests Dooming the Euro to Fail?