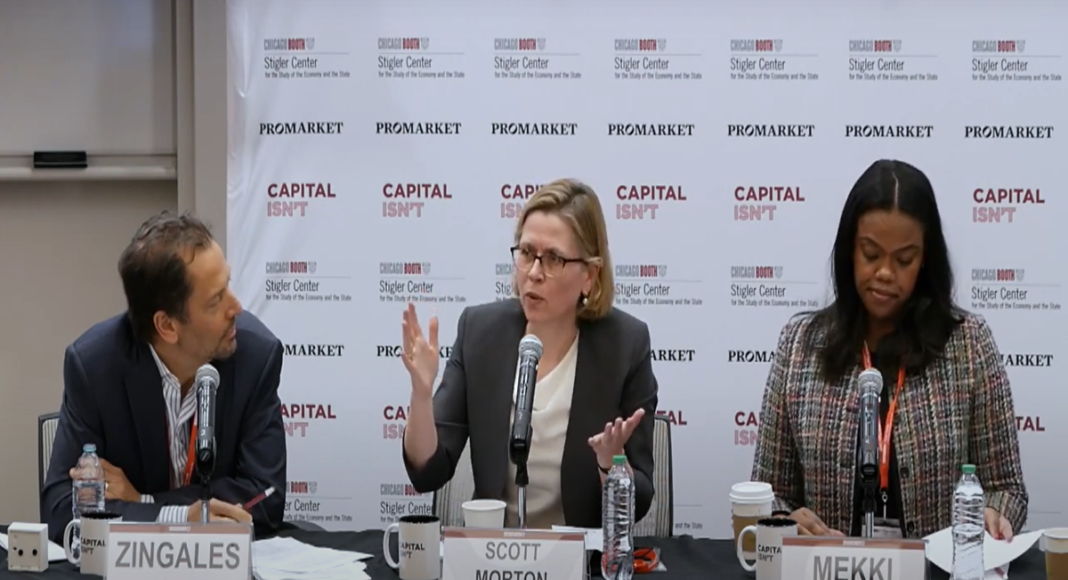 What if you were the antitrust queen or king for a day? What might your ideal regulation include, and how would it be enforced? So Luigi Zingales, director of the Stigler Center, put to a panel of antitrust experts discussing the future of the Consumer Welfare Standard as part of April’s 2022 Antitrust and Competition Conference at the University of Chicago’s Booth School of Business.

Alden Abbott of George Mason, Doha Mekki of the U.S. Department of Justice, and Fiona Scott Morton of Yale University responded to Zingales’ question by answering that encouraging competition should always undergird any antitrust policy.  “The proper question when evaluating a merger or a business practice is always whether the conduct is simply part of a competitive process, or whether the purpose is actually to suppress or even destroy competition,” Mekki replied.

Mekki, the principal deputy assistant attorney general at the DOJ’s Antitrust Division, cautioned, however, that “We, as lawyers, are not very well-suited to assess welfare, surplus effects, and transfers. And I would be very concerned about the kind of central planning that is attendant to agencies and courts making determinations about what is efficient and maximizing efficiency and welfare.”

Zephyr Teachout of Fordham University, the fourth and final participant in the panel, also stressed that antitrust must prevent “private forms of illegitimate power in the political sphere.”

Although there appears to be a broad understanding of the goals of antitrust law, the panelists agreed it has been historically difficult to translate these principles into practice. Scott Morton said that judges often “trust corporations, favor corporations, trust the monopolist to innovate, and put those values and beliefs over the needs and welfare of consumers.” Mekki seconded Scott Morton’s thoughts in her criticism of the Rule of Reason, a standard of antitrust analysis that advises courts to use several factors in their assessment, such as the purpose of the business agreement, market competition, and the participants’ market shares. “Maybe judges are importing certain views about the legitimacy of business conduct, the credibility of certain efficiency stories—but the bottom line is that we have an antitrust law that is nowhere near measuring antitrust problems in the US,” Mekki said.

The issue of antitrust practice appears to hinge on the ability to correctly evaluate the efficiencies and inefficiencies that market consolidation produces. Although it would not prove efficiency in itself, Scott Morton suggested shifting the burden of showing that an act of market consolidation would not reduce competition to the defendant might help reduce cases of unjustified market consolidation. However, Teachout thought this tactic might raise the administrative costs of adjudication too high and instead said that a proper analytical standard for antitrust cases will include a structural approach (e.g. market concentration), a list approach, (e.g., exclusive dealing), a business torts approach that uses accessible language to the public.

In the end, though, any antitrust model will require trade-offs, including sacrificing potential economic efficiencies to promote a more democratic system. Abbott cautioned that antitrust is already an uncertain tool for improving consumer welfare. Applying antitrust tools to other social spheres is even more precarious.

Mekki agreed that antitrust should not be designed to support goals beyond healthy competition. Though one can recognize and applaud the “attendant benefits” that rigorous antitrust has historically conferred on democracy, she added.  Teachout countered “It would be an incredible and unsupportable position to say that market structure has no relationship to political freedom…It is implausible to suggest that concentrated markets don’t change the dynamics of fear and speech in politics…There’s two possibilities: One is that antitrust accidentally creates freedom, sort of as an externality that we don’t make as a purpose. The other is that we in fact evaluate the success and failure of our antitrust regime in part based on whether or not it enables a free society.”

If there was any consensus from the panel, it was that antitrust has far to go to improve and manage competition. How to redesign antitrust and how far to expand its purview remain contentions of debate. So then, where does the debate go from here? As Scott Morton put it, “come back next year and find out.”