Not Everyone Agreed With Alberto Alesina, but Nobody Could Ignore the Work He Did 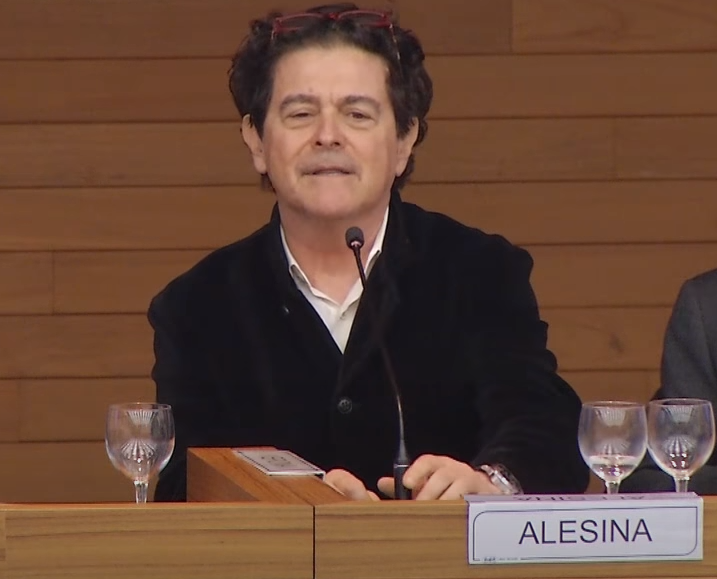 Jeffry Frieden
Jeffry Frieden is Professor of Government at Harvard University. He specializes in the politics of international monetary and financial relations. Frieden is the author of Currency Politics: The Political Economy of Exchange Rate Policy (2016); and (with Menzie Chinn) of Lost Decades: The Making of America's Debt Crisis and the Long Recovery (2011). Frieden is also the author of Global Capitalism: Its Fall and Rise in the Twentieth Century (2006), of Banking on the World: The Politics of American International Finance (1987), of Debt, Development, and Democracy: Modern Political Economy and Latin America, 1965‑1985 (1991), and is the co-author or co-editor of over a dozen other books on related topics. His articles on the politics of international economic issues have appeared in a wide variety of scholarly and general-interest publications.

Harvard professor Jeffry Fridel was a friend and a colleague of Alberto Alesina. They shared the beginning of their careers, a house (for a while), and a passion for the big questions: “In the early days of Political Economy, one of our principal goals was to show how central economic interests were to political activity.”

Alberto Alesina passed away last Saturday, at the age of 63. It will take me a long time to get over the shock and pain of his death, but I wanted to share some thoughts about this most intelligent of scholars and most generous of human beings.

I first met Alberto over 30 years ago. Guido Tabellini was then my colleague in economics (I was in Political Science) at UCLA, and he and Alberto were collaborating on their path-breaking work on the political economy of macroeconomic policy. For a variety of reasons, Alberto was a frequent visitor to UCLA. We became friends almost immediately.

We were young assistant professors then, on something of a crusade to establish Political Economy in both Economics and Political Science. (There was a fine group of like-minded scholars in both departments at UCLA at the time, including David Dollar, Sebastian Edwards, Jack Hirshleifer, Ken Sokoloff, and Ed Leamer in Economics; and Barbara Geddes, David Lake, Ron Rogowski, George Tsebelis, and Michael Wallerstein in Political Science.)

The study of politics, especially in political science, had been dominated by what was called “behavioralism,” which focused on how cultural and psychological factors determined political behavior.

In those early days of political economy, one of our principal goals was to show how this focus limited our understanding of politics, and how central economic interests were to political activity.

It is paradoxical that in recent years Alberto and his many collaborators have worked hard to bring cultural and psychological factors back into political economy—a fact that demonstrates both his versatility and his willingness to entertain a vast array of factors in explaining our complex world.

Alberto had just gotten tenure, jointly in economics and government (political science), when I first visited Harvard for a semester. All of us saw this as a great victory for political economy.

It was a recognition of Alberto’s scholarly excellence, to be sure, but also of the fact that he had convinced skeptics in both disciplines of the importance of a field that he had played a major role in building.

During my first year at Harvard, Alberto was on leave. My wife and I sublet his beautiful apartment on the first three floors of an 1867 townhouse on the first block of Commonwealth Avenue. When summer came and Alberto returned, there was still work being done on our new home and my wife was extremely pregnant. Alberto insisted we stay on, so we lived together for several months.

Alberto lived on the first floor, we lived on the third floor, and we met for dinner in between. Alberto was going through a rough patch in his personal life then, and I think he enjoyed the company. I know he appreciated that we did all the cooking—I don’t think he had ever turned on the oven in the apartment.

From that time onward, we were close colleagues. Alberto went full-time in economics after a while—he had had his fill of political science—but his passionate commitment to political economy and to inter-disciplinary outreach never wavered. It may be hard for younger scholars to imagine the general lack of interest—and occasional hostility—that greeted much of the early work in political economy. But over time, as Alberto and his students and co-authors produced wave after wave of important research, the scholarly community gave him the personal and disciplinary recognition he deserved, and that he brought to the field of political economy more generally.

Eventually, the NBER created a political economy program, which Alberto ran with his usual charm and intelligence. By now political economy is well established in both economics and political science, in no small measure due to the intellectual and personal influence of Alberto Alesina.

As a scholar, Alberto was a force of nature. He had a knack for finding important questions, figuring out how to ask them, and coming up with interesting answers. Whether it was how elections affect monetary policy, or why there is so often divided government in America, or why stabilizations are delayed, or why the welfare state looks so different in Europe and America, or how the plow changed the role of women in society, or dozens of other disparate and intriguing questions, Alberto trained his endless curiosity and boundless energy—and enormous following of younger scholars—on these topics and brought forth fascinating arguments and evidence.

Not everyone agreed with him—I’m quite sure there were times that he didn’t agree with himself—but nobody could ignore the work he and his followers did.

On a personal level, Alberto was a model scholar. He was generous with his time to everyone who approached him. His value as a teacher, mentor, and co-author is made clear by the extraordinary number of former students and collaborators who today dominate the field of political economy in economics. At the many seminars he attended—and often ran—he could be counted upon to have some of the sharpest questions and comments, always presented with respect and good humor.

Alberto’s joy at hearing an interesting question or idea was obvious and infectious. I would occasionally send a graduate student interested in political economy to talk with him, and I could count on getting a happy phone call or email in return, expressing his enthusiasm for the person’s promise as an academic and for the prospect of working together. Alberto was a scholar’s scholar.

Alberto was a warm, kind, and gentle man. He was sincerely concerned for the well-being of his students, collaborators, and friends. He went out of his way to make people feel appreciated and respected, and never wavered in his support for deserving young scholars.

Perhaps what I will remember best and longest about Alberto is his laugh. We kidded each other pretty mercilessly, he for my love of baseball, me for his inability to appreciate that greatest of all games. It usually ended with Alberto throwing back his head and laughing. Sometimes he would punctuate the laugh with an expression I think of as quintessentially his: “Bloody ‘ell.” A completely British, somewhat archaic, phrase, spoken by a brilliant American academic with a thick Italian accent. Only Alberto could make it sound appropriate.

It will be hard to run our joint political economy seminar, or to attend the political economy lunch or the NBER’s Political Economy Program and Summer Institute, with Alberto’s seat empty. Indeed, it is hard to imagine these things going on without Alberto to run them with his usual good humor, warmth, and intelligence. Nonetheless, the best tribute to Alberto’s legacy is that he leaves an abundance of followers capable of picking up where he left us, much too suddenly and much too soon.
Alberto Alesina made an immense mark on political economy, and on economics.

His impact will live on for many, many years, both in his work and in the scores of former students and collaborators who now dominate the field. But as a person, Alberto is irreplaceable. We will all miss him terribly. I miss him already, terribly.