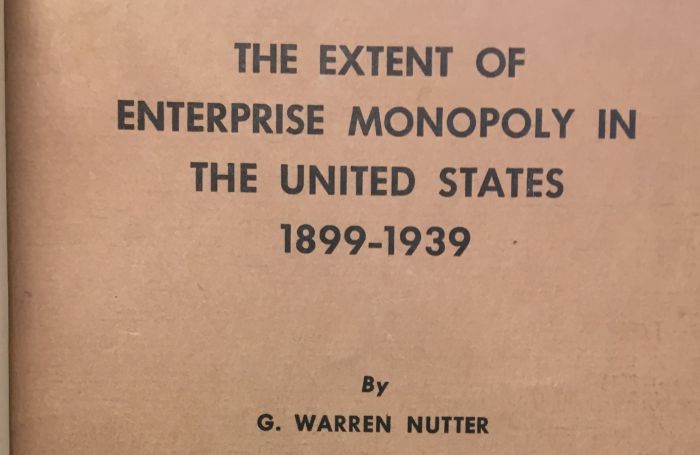 Daniel Kuehn
Daniel Kuehn is a Senior Research Associate in the Income and Benefits Policy Center at the Urban Institute. He teaches cost-benefit analysis at George Washington University. Daniel’s research focuses on labor economics and employment policy, particularly apprenticeship training and workforce development. He also studies and publishes in the history of economics, particularly the life and thought of James M. Buchanan and Warren Nutter. He holds a PhD in Economics from American University, an MPP in labor market policy from George Washington University, and a BA in Economics and Sociology from the College of William and Mary.

Editor’s note: Aaron Director, one of the founders of the so-called Chicago School of Law and Economics, died 15 years ago. To mark the anniversary of his death, ProMarket is publishing a series of articles on his work and controversial intellectual legacy. You can find previous installments here.

Aaron Director had an enormous impact on antitrust law, first through the activities of the Free Market Study (1946-1952) and the Antitrust Project (1953-1957), and through his subsequent work and teaching at the University of Chicago Law School. All of the blog posts on Director published in ProMarket recently emphasize his application of economic theory and logic to antitrust law. Stephen Stigler began the series with a story about Director’s thought experiment on blue Sunday laws. Sam Peltzman excerpted a discussion of Director’s Socratic method and his simple model of the tie-in problem. Matt Stoller’s post is perhaps the strongest in emphasizing Director’s deployment of “the mathematized jargon of right-wing economic models” and “pure logic.”

What each of these pieces neglects, however, is the fact that empirical evidence—not just disembodied theory—was an important building block of Director’s views on monopoly. Stoller’s post further criticizes Director as someone who was “dedicated to setting free the power of concentrated capital.” This is also misleading. Although Director criticized much of mid-century antitrust law during his career, he did so out of a belief in the pervasiveness and potency of competition rather than out of support for “concentrated capital.”

One of the most important projects funded under the Free Market Study was economist Warren Nutter’s empirical dissertation on monopoly power in the United States. Aaron Director chaired Nutter’s dissertation committee and also penned an illuminating preface to the monograph when it was ultimately published by the University of Chicago Press in 1951.

Director began his preface with an homage to competition and antitrust law. “The American tradition,” Director wrote, “emphasizes not only private enterprise but also competitive enterprise. The anti-trust acts constitute both a symbol of this tradition and a significant contribution to making it effective.” Director juxtaposed antitrust policy with the growing threats of rent control, tariffs, and patent law, which he argued tend “to favor monopoly instead of competition” in the economy.

After framing the problem as one of concentration vs. competition, Director offered two explanations for why policymakers “favor monopoly instead of competition.” First, he cited growing doubts that the market economy was a desirable way to organize society. These doubts led to interventionism, which led to the concentration of economic activity. Second, he noted that Americans were increasingly convinced that even in a market economy, “competition is not ‘natural’ and that a competitive system inexorably develops into a system of monopoly.” Nationalization of industry was accepted by the public because of the view that business concentration was inevitable, so there was no additional harm in directing the process of concentration with state power. Director argued that the assumed inevitability of business concentration even “helps explain the negative attitude of economists to the policy of the anti-trust acts.”

Warren Nutter’s contribution was to dispose of the idea that monopolization was an inevitable trend in market economies. Using Commerce Department data, Nutter assigned detailed industries to three categories: “effectively monopolized,” “workably competitive,” and “governmental.” He then estimated the share of output attributable to monopolized or competitive industries in 1899 and 1937.

Nutter’s equivocation in the labeling of monopoly categories demonstrates his sensitivity to the uncertainty of the underlying data (a sensitivity that he also exhibits in later work using even more dubious Soviet statistics). Aaron Director reports in his preface that Nutter found “no basis for the impression that there has been a significant increase in monopoly in this country.” Not only was there no trend towards business concentration, but “effectively monopolistic industries account for about a fifth of the national income.” Director considered this “by no means a negligible matter,” but emphasized that the result “lends considerable weight to the position that it is manageable.”

Many historians of economics treat Nutter’s dissertation as a political document. For example, Robert Van Horn describes its significance by noting that “[s]ince the Left had maintained that monopoly had been increasing by leaps and bounds, Nutter’s investigation dealt a sharp blow by suggesting that the Left had exaggerated the growth of monopoly.”

But “the Left” as a political bloc was not Nutter’s target. He criticized economists who argued that competition was in decline, some of whom were on the left but some of whom were not. One target, Clair Wilcox, was an important force behind the adoption of the trade-liberalizing General Agreement on Tariffs and Trade (GATT), a precursor to the World Trade Organization. Nutter criticized more left-leaning economists as well, including Gardiner Means and Willard Thorp. But others that he targeted—such as Walter Crowder—do not appear to have had any strong political affiliations at all. Nutter’s dissertation was critical of the dominant perspective on monopoly, not of any particular political viewpoint.

Nutter’s findings, which were supported and promoted by Director, formed the empirical foundation for the Chicago perspective on monopoly and competition. Nutter provided data justifying the famous Chicago School assumption of competitive markets that avoids the complications of imperfect competition. This assumption was bolstered a few years later, when Chicago economist Arnold Harberger estimated that the welfare losses from monopoly power were relatively minor.

The Chicago School’s optimistic attitude about competition and monopoly continues to fuel disagreement to this day. Economists on social media recently argued about the claim that perfect competition was “a reasonable description of most markets,” as a recently published Chicago price theory textbook asserted. Regardless of where one lands in the perennial disagreement about the competitiveness assumption, Director was clearly persuaded by Nutter’s empirical work and saw widespread competition—and not “concentrated capital” —as a strength of the US economy.

Director reiterated the importance of Nutter’s result in a subsequent conference at the law school. “Fortunately,” Director noted, natural monopolies do “not appear to be very extensive” in the US economy. This was fortunate in Director’s view because if monopolies were more commonplace, “the conflict between economic freedom and economic efficiency would become significant.” Like any other conservative, Director was not eager to wield the power of the state. Regulating concentrated capital was defensible for Director if it was necessary, but he likely found hope and relief in Nutter’s analysis that such a course was not necessary.

As the Free Market Study evolved into the Antitrust Project, Director and his colleagues began probing the edifice of antitrust law from many different angles. Previous ProMarket posts, for example, highlight Director’s work on the tie-in problem and predatory pricing. In 1956, Director also drew attention to what he called “as yet unsettled” questions in the areas of restrictive practices and collusion. This problem-by-problem approach was generally how the work of the project proceeded. When Director surveyed the antitrust landscape he saw a collection of relatively specific questions that deserved the attention of both economists and lawyers, and he attacked each of those problems in turn. To borrow a metaphor from another Chicago Law professor, Barack Obama, Aaron Director attacked antitrust law with a scalpel, rather than a hatchet (although his more aggressive protégés did prefer the hatchet).

Director’s influence on the Chicago approach to antitrust is enormous in part because he supported the work of so many economists and law students. One of these students, Warren Nutter, provides a useful lens through which we can better understand Director’s own thought and contributions. Empirical work by economists like Nutter was as important for Chicago antitrust as theory and logic. This empirical work tended to find that competition was robust and widespread, bolstering the view of the Chicago School that perfect competition was a reasonable assumption in most cases. Nutter’s findings also assured Aaron Director that competition was not helpless in the fight against monopoly. Although Director was never categorically opposed to antitrust, he saw many problems in how antitrust law was practiced. If competition did not need antitrust law to survive, it was all for the better.

Daniel Kuehn is a Research Associate at the Urban Institute.

Share
Facebook
Twitter
Email
Previous article“Avoiding Plutocracy Would Require a Political Change”: Branko Milanovic on the Future of Capitalism
Next articleUber and the Sherlock Holmes Principle: How Control of Data Can Lead to Biased Academic Research