Data Workers of the World, Unite! 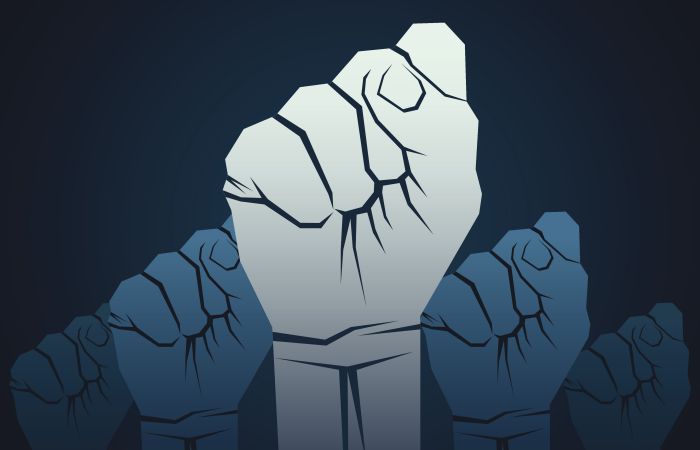 Eric A. Posner
Eric Posner is Kirkland and Ellis Distinguished Service Professor of Law, University of Chicago. His research interests include financial regulation, antitrust law, and constitutional law. He has written a dozen books and more than a hundred academic articles on law and legal theory. His most recent books are How Antitrust Failed Workers (Oxford University Press, 2021), Radical Markets (Princeton) (with Glen Weyl), which was named a best book for 2018 by The Economist; Last Resort: The Financial Crisis and the Future of Bailouts (Chicago), which was named a best book for 2018 by The Financial Times; and The Twilight of Human Rights Law (Oxford). He is of counsel at MoloLamken LLP, a fellow of the American Academy of Arts and Sciences, and a member of the American Law Institute.

The Citizens United ruling contradicts the Founders, decades of Supreme Court precedent and the will of the American people.
Read more
ESG

With solutions to the threats of digital monopolies currently looking unlikely to come from the state, law and economics scholars Eric Posner and Glen Weyl, authors of the forthcoming book Radical Markets, propose looking to the power of organized labor. A data workers’ (that is, social media users’) labor union, they argue, could help check the offenses of the digital platforms.

Editors’ note: In advance of next week’s panel discussion “Radical Markets and the Captured Economy” at the Stigler Center, we offer this extract from chapter 5 of Weyl and Posner’s Radical Markets: Uprooting Capitalism and Democracy for a Just Society, forthcoming from Princeton University Press.

Many aspects of the story we have told [in previous chapters] are unique to present technology and the norms that have developed around the Internet. However, the idea that monopsonistic power created by technologies with strong economies of scale would lead to undercompensated labor and thus retard both economic development and equality is not a new one. It is one of the classic themes of economic history and the central idea of the most famous economic historian of them all, Karl Marx.

A central intellectual aim of Marx’s 1867 first volume of Das Kapital was to explain why the wealth and well-being of proletarians (workers without property) had, as of the mid-nineteenth century, improved so little since the end of feudalism.1 Marx claimed to identify a necessary tendency of capitalists to “exploit” workers by holding their wages below the value they generated. Marx argued that these labor practices created what his collaborator Friedrich Engels called a “reserve army of the labor” (that is, a class of unemployed) whose even more squalid condition would persuade workers to do anything to maintain their jobs.2

As economist John Roemer showed, Marx’s conclusions are extremely unlikely to prevail if employers compete for workers.3 However, they are exactly what one would anticipate in a world where capitalists conspired with each other, or had sufficient unilateral power, to hold down wages. Beatrice and Sydney Webb, a dynamic pair of late nineteenth-century British Radicals, advocated collective bargaining by workers, arguing that it would make production more efficient by raising wages above the levels that drove workers out of the labor force.4 John Kenneth Galbraith, the mid-twentieth-century American economist […], hailed unions as a necessary form of “countervailing power” required to balance the power of monopsonists.5

This view has been partly vindicated by the research of subsequent economists. Economic historian Robert C. Allen shows that prior to the emergence of unions, British wages during the early process of industrialization hardly advanced at all despite improvements in technology.6 Once unions managed to counter the monopsony power of British industrialists, not only did wages quickly increase, but the pace of overall productivity radically accelerated. Economists David Autor, Daron Acemoglu, and Suresh Naidu believe that the breaking of monopsony power through labor unions, government labor regulation, minimum wages, and other reforms was critical to the further acceleration of productivity.7 Beyond their role in collective bargaining, unions served other functions that helped support the “Fordist” mode of assembly line–based production that prevailed in the twentieth century: they screened and guaranteed the quality of the work produced by their workers and helped them learn the skills required by a rapidly changing work environment.

To be sure, many other things were happening at the same time, making it difficult to trace clear lines of historical causation. Unions also brought many inefficiencies and rigidities, caused strikes, and may themselves have accumulated significant market power. The hostility they attracted and the extent to which they became inflexible and outmoded has led to their decline in the last several decades.

Yet even as unions have declined, some of the conditions we describe above have important resemblance to the conditions that helped stimulate their growth and benefits. The monopsony power of siren servers, we have argued, may be holding down wages for data laborers at 0 (or more precisely at the value of the services and entertainment these laborers derive from using digital services). This may suppress the productivity of the digital economy by reducing the quality and quantity of data and contribute to the maldistribution of gains from AI technologies. An individual data worker lacks bargaining power, so she cannot credibly threaten to withdraw her data from Facebook or Google unless she receives a fair reward.

Furthermore, to realize the gains from data as labor, data workers will need some organization to vet them, ensure they provide quality data, and help them navigate the complexities of digital systems without overburdening their time. These triple roles, of collective bargaining, quality certification, and career development, are exactly the roles unions played during the Industrial Age.

It may be time for “data workers of the world (to) unite” into a “data labor movement.”8 A striking feature of the data labor market is that it is an international market, one that is almost completely unaffected by borders and government regulation. Once people awaken to their role as data laborers—obtain a “class consciousness,” if you will—organizations (sort of like unions) may emerge to supply data laborers with the means to engage in collective action. Imagine, for example, a data labor union that solicited members—the data laborers—by promising them higher payments for their data. Once the union obtained a critical mass, it could approach Facebook or Google and threaten a “strike” (also, effectively, a boycott because data laborers are simultaneously consumers of Facebook’s and Google’s services). The technical details would be complex, but we can imagine a range of possible approaches.

The union could simply call on its members to stop using Facebook or Google for a day if the companies do not negotiate. A more complicated approach could involve routing data labor through platforms set up by the union, so that the union could disrupt the supply of data if and when the Internet companies on the other side refused to pay reasonable wages. A Facebook user would reach her Facebook account through the union’s platform, so that the union could enforce collective action among users by shutting down the account or providing limited access to the account for the duration of the strike. At present, an Internet Service Provider could organize such an action, though it would need to structure itself as a labor union to avoid antitrust charges.

It seems to us that these unions could be effective. Unlike traditional unions, they combine labor stoppages and consumer boycotts—because, as noted, data laborers are simultaneously consumers. During a strike, Facebook would lose not only access to data (on the labor side) but access to ad revenues (on the consumer side). It’s as if autoworkers could pressure GM or Ford not only by stopping production but also by refusing to purchase cars. Also unlike traditional unions, which must struggle to maintain solidarity during strikes, the data unions could enforce the “picket line” electronically. Furthermore, the very network effects that entrench digital monopolies would work against them in this scenario: it would be embarrassing to break a Facebook strike if all your friends were striking on the same day.

Finally, a data labor union might help foster digital competition by breaking the stranglehold on data of a few of the most powerful siren servers. The unions might find it optimal to share data between many different digital companies, rather than causing it to accumulate in one place. Of course, there are downsides as well—data unions, like traditional unions, might abuse their authority. However, we believe that at the present time, in light of the absence of any market—Radical or otherwise—in data labor, the gains exceed the losses.

Eric A. Posner is the Kirkland and Ellis Distinguished Service Professor at the University of Chicago Law School. His many books include The Twilight of Human Rights Law and Climate Change Justice (Princeton).

E. Glen Weyl is principal researcher at Microsoft and visiting senior research scholar in economics and law at Yale University.

Share
Facebook
Twitter
Email
Previous articleDo Firms Use Capital and Labor Efficiently? Evidence and Implications of Resource Misallocation
Next articleWhat Used Books Can Tell Us about Competition in Online Markets