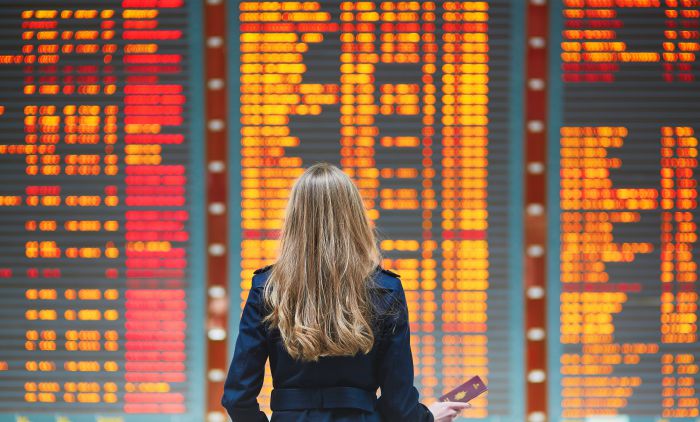 What are airline executives really saying to each other with their extensive discussion of “capacity discipline”? New research from the University of Virginia finds talk of capacity discipline during quarterly earnings calls precedes coordinated capacity reductions by legacy airlines.

On April 27, 2010, Glenn Tilton, the CEO of United Airlines, expressed an interest in seeing airlines continue to engage in a strategy of restricting the number of offered seats and flights, a strategy euphemistically referred to as capacity discipline. “As we have said before,” Tilton stated, “we firmly believe that the only way the industry can fully recover and meet its financial targets is through capacity discipline.” This echoed a similar opinion offered by Scott Kirby, the president of US Airways, back in 2008, when he said, “We certainly like seeing capacity discipline at all airlines.”

In recent years, airline executives have been discussing capacity discipline frequently, with the topic coming up in 54 percent of the quarterly earnings conference calls of legacy carriers (Alaska Airlines, American Airlines, Continental Airlines, Delta Airlines, Northwest Airlines, United Airlines, and US Airlines) since the end of 2002. This has caught the attention of many industry analysts, reporters, and, notably, the Department of Justice which, in 2015, was reported to have opened an investigation into whether airlines were engaging in capacity collusion.

In our paper “Public Communication and Collusion in the Airline Industry,” we found evidence that legacy airlines used discussions of capacity discipline in their quarterly earnings calls to coordinate capacity reductions in competitive (non-monopoly) routes. In particular, we found that when all of the airlines serving a particular airport-to-airport market discussed capacity discipline in their most recent earnings call, they reduced the number of seats offered from 1.25 percent in large markets up to 4.21 percent in smaller markets, even after controlling for a rich set of factors that affect airlines’ capacity choices. In other words, legacy carriers used public communication (the discussion of capacity discipline) to collude with their competitors in order to reduce the number of seats that they as a group offered for sale.

Our finding speaks to an ongoing debate among policy makers regarding how to best promote market efficiency. On one hand, antitrust policy forbids firms from communicating about their strategic choices with each other in order to deter collusion and promote competition, which increases market efficiency. On the other hand, financial regulators promote open and transparent communication between publicly traded firms and their investors to minimize informational rent and ensure efficient allocation of scarce (investment) resources. While this latter effort is meant to level the playing field for investors, policy makers have raised concerns in recent years that these efforts may also facilitate anticompetitive behavior. Indeed, the OECD Competition Committee discussed this trade off in a recent report noting that “information exchanges can … offer firms points of coordination” while also “allow[ing] firms to monitor adherence to the collusive arrangement.”

We found that the concern that companies may take advantage of required financial transparency to coordinate capacity decisions is not simply a theoretical possibility. Airlines were in fact taking advantage of the transparent nature of earnings calls to coordinate strategic choices. These coordinated capacity reductions can have far-reaching implications for consumers, increasing the prices consumers pay, and reducing the quality and availability of flights they can book.

Maintaining a collusive arrangement is typically a challenge for companies because of the strong incentive to cheat on its collusive partners by increasing its capacity when its partners are reducing capacity. This is due to the fact that when everyone else is reducing capacity, it pays off to be the only company increasing it. A collusive agreement can be sustained, though, when firms engage in long-term interactions, and when they can observe and punish any cheaters. Of course, this requires that each firm in a market can fully observe its competitors’ actions and properly determine whether each competitor followed through on the collusive agreement. Economists have long believed that when these conditions break down collusion is not sustainable. Yu Awaya and Vijay Krishna, however, show in two recent papers that if firms can send public messages—such as the discussion of capacity discipline—then they might be able engage in collusion even under circumstances that would normally make collusion impossible.

Motivated by the work of Awaya and Krishna, we investigated whether this type of collusive behavior was taking place in the airline industry. One of the challenges in doing so is to correctly measure communication among airlines. To that end, we collected transcripts of quarterly earnings calls for eleven airlines from the fourth quarter of 2002 to the fourth quarter of 2016. We then parsed these transcripts to identify when carriers discussed capacity discipline in order to identify when they were attempting to communicate with each other.

To determine whether airlines were using this discussion of capacity discipline to coordinate capacity decisions, we first categorized each market in each month as one where the legacy carriers were “talking” or one where they were not. Motivated by the theoretical literature on collusion, we considered carriers in a market to be “talking” when all of the carriers discussed capacity discipline in their most recent quarterly earnings calls. We then sought to determine how carriers’ capacities differ between markets where the legacy carriers were talking versus those where they were not.

Of course, other factors go into determining seat and flight capacities. But even when controlling for these additional factors, we found that when all of the legacy carriers serving a given airport-to-airport route discussed capacity discipline in their last quarterly earnings call, they reduced their capacity by 1.45 percent. The effect was larger in small markets (4.21 percent vs. 1.25 percent in large markets). Interestingly, we found that the response was isolated to legacy carriers. Low-cost carriers, such as Spirit Airlines, did not alter their offered capacity in response to the communication behavior of the legacy carriers.

In order to verify that our results were not spurious, we conducted a number of tests to address two possible concerns. First, how can we be sure that airlines were only using words associated with capacity discipline to communicate with each other and not sending some other messages? Second, could there have been some other changes in the economy or the environment that we did not account for in our analysis but that simultaneously led airlines to reduce capacity and discuss capacity discipline? To address these concerns, we took advantage of the large set of text transcripts that we had collected for each airline.

To answer the first question, we examined whether there were any other keywords that also had a negative effect on capacity by running a series of placebo tests, our hypothesis being that if airlines were using the discussion of capacity discipline to coordinate their behavior, we should find no evidence that the simultaneous use of these placebo words has a negative effect on capacity. To determine what such placebo words might be, we analyzed the airlines’ earnings calls using a computational linguistics model developed at Google to determine keywords that are a) semantically and syntactically dissimilar from capacity discipline; b) do not always appear with capacity discipline; and c) are used as frequently as capacity discipline is discussed. We identified 14 such words, and none of those 14 words were associated with a reduction in seats.

This finding should not be surprising. The airline industry has a long history of anticompetitive behavior, of which this example is just the latest chapter. However, as noted above, the issue of airline anticompetitive behavior, and the inefficiencies that result, is intimately connected to the issue of financial market efficiency. The appropriate policy for balancing the two seemingly conflicting goals of airline market efficiency and financial efficiency is not clear. Ultimately, we believe our findings provide important evidence regarding the costs associated with increased transparency in our financial institutions, and hope that policy makers will keep these concerns front-of-mind as antitrust enforcement and transparency regulations continue to evolve.

Gaurab Aryal is an Assistant Professor of Economics at the University of Virginia.

Federico Ciliberto is an Associate Professor of Economics at the University of Virginia, and a Research Fellow at DIW Berlin and at the Centre for Economic Policy Research.

Benjamin Leyden is a Ph.D. candidate in economics at the University of Virginia and (beginning Fall 2018) an Assistant Professor of Strategy and Business Economics at the Dyson School of Applied Economics and Management at Cornell University.