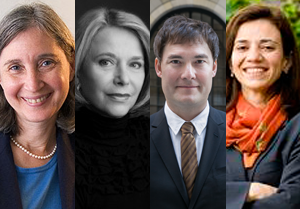 The Stigler Center will host a panel on the prevalence of shareholder activism and how to improve corporate oversight on May 3rd.

As shareholder activism spreads across industries, so do questions about its effect on corporate governance and the long-term health of companies. In a letter to investors earlier this year, General Electric CEO Jeff Immelt articulated the ambivalence many feel toward the rise of shareholder activism, writing that activists are not “necessarily bad for companies,” but also noting that “we have done a better job of being our own activist.”

During a panel hosted by the University of Chicago at the World Economic Forum in Davos, BlackRock chairman and CEO Larry Fink blamed hedge fund activists for corporate short-termism. In a letter to S&P 500 CEOs in February, Fink advocated for activism that focuses on “long-term value creation” and called companies to resist pressures for higher dividends or share buybacks. According to FactSet analyst Andrew Birstingl, “In 2015, there were 70 activist campaigns in which a dissident objective was to return cash via dividends and/or buybacks… Of these 70 activist campaigns in 2015, the activists were successful in 31 campaigns, which was another record high.”

Why is shareholder activism so prevalent these days, and what are some of the systematic changes that could improve corporate oversight? On Tuesday, May 3rd, the Stigler Center will host a panel discussion that will try to answer these questions. The panel will include Karla Scherer (Chairman of the Karla Scherer Foundation), Nell Minow (Vice Chair, ValueEdge Advisors), Paola Sapienza, a Professor of Finance at the Kellogg School of Management, and hedge fund advisor Jeff Gramm.

Karla Scherer is the daughter of Robert Pauli Scherer, who invented the machine that first produced soft gelatin capsules. In the 1980s, she waged a successful proxy battle that saw her take control of the company her father founded, from her then-husband, the company’s CEO.

Paola Sapienza is the Donald C. Clark/HSBC Chair in Consumer Finance Professor at the Kellogg School of Management. She also serves as a faculty fellow for the Zell Center for Risk Research, a research affiliate of the Center for Economic Policy Research and a faculty research fellow in the National Bureau of Economic Research’s program on corporate finance and political economy. Her academic work has dealt with corporate governance, banking and financial institutions, behavioral economics, behavioral finance, corporate finance, emerging markets and regulation of financial markets, private equity and venture capital. She has been featured in Thomson Reuter’s list of most influential scientific minds in 2014 and 2015. Sapienza was also an independent board member of the Italian insurance provider Assicurazioni Generali from April 2010 to April 2016.

Nell Minow, dubbed “the CEO killer” by Fortune Magazine, is a shareholder advocate and journalist who specializes in corporate governance and popular culture. Before becoming Vice Chair of ValueEdge Advisors, she co-founded the research firm The Corporate Library (which later became GMI), served as the general counsel and later as President of advisory firm ISS, and was also the Principal of LENS, an investment firm that used shareholder activism to increase firms’ value.

Jeff Gramm is a hedge fund manager and the author of Dear Chairman: Boardroom Battles and the Rise of Shareholder Activism.  He teaches value investing at Columbia Business School.