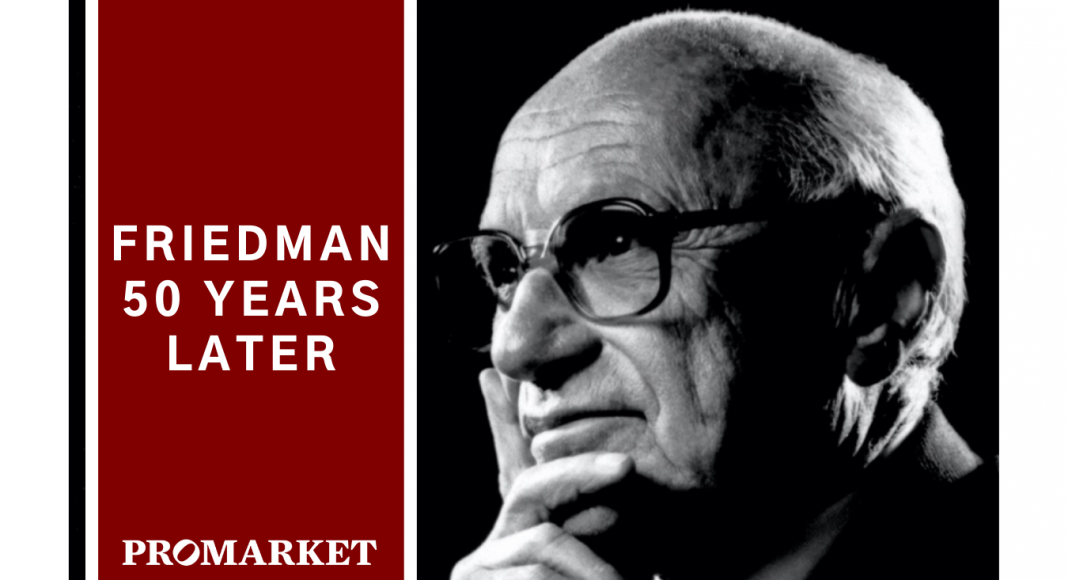 In the mid-1980s, Milton Friedman’s view that the only social responsibility of business is to increase its profits became dominant in business and academia. Since the Great Financial Crisis, his views have increasingly been challenged. To mark the 50-year anniversary of Friedman’s influential NYT piece, we are launching a series of articles on the shareholder-stakeholder debate.

Since the end of the 19th century, capitalism has been increasingly organized in the corporate form. Thus, the question of how corporations should be run is essential to shaping which type of capitalism we want.

The debate between a shareholder-centric perspective and a stakeholder-centric one dates back at least to the early 1930s, when Adolf Berle and E. Merrick Dodd argued these two positions in the Harvard Law Review. Yet, a crucial milestone in this debate has been set by Milton Friedman who, fifty years ago almost to the day, wrote in the New York Times Magazine that the only social responsibility of business is to increase its profits. Whether you love or hate his arguments, Friedman has set the terms of debate for the last 50 years.

Since the mid-1980s to the early 2000s, Friedman’s position was dominant not only in academia, but also in the business world. In 1997, the Business Roundtable proclaimed that “the principal objective of a business enterprise is to generate economic returns to its owners,” all but endorsing Friedman’s position.

Since the Great Financial Crisis, Friedman’s view has become increasingly unpopular. In the political arena, many prominent political figures, from Elizabeth Warren to Joe Biden, are calling for a stakeholder-centric corporation. In academia, the British Academy stated that  “A corporation must have a set of clearly defined and aligned purposes—the goals it actively pursues and its contributions to societal goals or public interests (emphasis added).” Even in the business world, the Business Roundtable changed its position in 2019, proclaiming that “While each of our individual companies serves its own corporate purpose, we share a fundamental commitment to all of our stakeholders.”

Given the increasing challenges to Friedman’s position, it is only fair that we use this anniversary to assess where we stand on this debate. To this end, the Stigler Center has launched three initiatives. To celebrate the worldwide impact of Friedman’s contribution, the Stigler Center co-sponsors with Chicago Booth a worldwide set of panels starting in Hong Kong at 5pm HKT on September 10, continuing in London on September 10 at 1pm BST, and finishing in Chicago on September 10 at 11am CST. The Chicago Panel will be followed by a keynote speech by Nobel Prize winner Oliver Hart.

At the end of these worldwide panels, the Stigler Center’s Political Economy of Finance conference, now in its fourth edition, will be dedicated to the debate on the social responsibility of business. The panels, the keynote, and the conference will all be virtual. Thus, people can attend from all over the world, just register here. Last but not least, ProMarket will host a series of contributions on this theme.

Before we open the debate, however, it is important that we agree on what Friedman said and what he did not. First of all, the New York Times piece should be read with chapter 8 of his 1962 book Capitalism and Freedom, which Friedman refers to in his article. In the book, Friedman makes clear that only in a competitive environment businesses have no social responsibility. “The participant in a competitive market has no appreciable power to alter the exchange, he is hardly visible as a separate entity, hence it is hard to argue he has any ‘social responsibility.’” In contrast, “the monopolist is visible and has power. It is easy to argue that he should discharge his power not solely to further his own interest but to further socially desirable ends.” So it is perfectly coherent with Friedman’s view of the world to ask what is the social responsibility of digital monopolies like Google and Facebook.

Friedman espoused the contractarian view of the corporation—i.e., that corporations are just a nexus of contracts freely drawn by the various parties involved. According to this perspective, corporations are no different from a collection of individuals. Hence, they should not have any social responsibility different from that of individuals. It is important to emphasize, thus, that this does not mean “no responsibility.” In fact, at the end of the NYT essay, Friedman makes clear that corporations have the social responsibility to play within the rules of the game, “which is to say, engage in open and free competition without deception or fraud.” Thus, Friedman believes that companies have not just a legal, but also a social responsibility to not collude, deceive, or defraud. This is a far cry from the “greed is good” version popularized by Gordon Gekko in the Oliver Stone movie Wall Street.

Friedman would not object to the goals contained in the 2019 Business Roundtable Report, from “delivering value to our customers” to “investing in our employees,” from “dealing fairly and ethically with our suppliers” to “supporting the communities in which we work,” to the extent that these goals are functional to “generating long-term value for shareholders.” This is a straightforward application of the principle of “no taxation without representation.” Any deviation from profit maximization is borne by the shareholders, who are the residual claimants. Thus, deviating from profit maximization is a form of taxation, which only the shareholders can impose on themselves. Otherwise, it is expropriation.

Thus, Friedman is not necessarily against the idea that individuals or businesses might pursue social objectives different than maximizing monetary returns. He is against the idea that these responsibilities or different objectives might be imposed on shareholders by other constituencies. If we accept a contractarian view of the corporation, it is very hard to disagree with this conclusion.

Share
Facebook
Twitter
Email
Previous articleFacebook Threatens to Block the News. Here’s Hoping
Next articleThe Trump Administration Is Backing Out of a $647 Million Ventilator Deal After ProPublica Investigated the Price