From Politics to Macroeconomics and Beyond 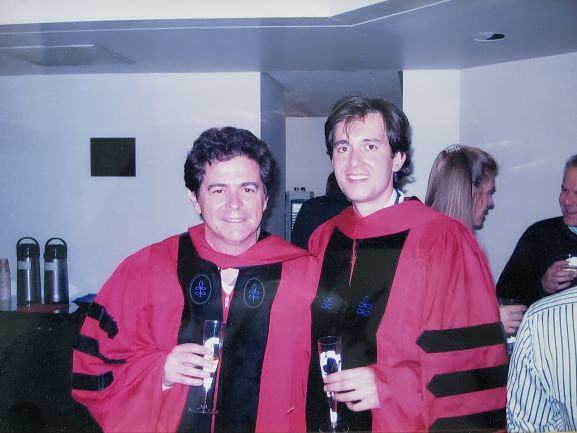 Alberto Alesina’s curiosity and intellect led him to a research path that opened up entire fields of research and deepened our understanding of political economy.

Every time a student enters my office, I think of Alberto Alesina and his office. “Come, come, but do not call me ‘Professor Alesina.’ Call me Alberto.”

These are not exactly the usual words that a student, especially an Italian one, expects to hear from one of the most respected scholars at Harvard University. However, those were the first words that Alberto Alesina addressed to me in the summer of 2000. They marked the beginning of a research path in the field of economic and social analysis opened and deepened by Alberto: political economics. Thanks to his studies on political distortions in the economic system, Alesina had a good chance of receiving the Nobel Prize for Economics for his scientific contributions, had he not disappeared prematurely on May 23, in Boston.

In Alberto’s office at the Littauer Center in Cambridge, Massachusetts, implications of intellectual equality were explicit: He was always ready to listen to all of us students, without any form of discrimination. Research ideas and our questions were the only important issues. His humility was unique: even in his last correspondence with me, a few days ago, he called himself “incompetent” for some administrative quisquilia at the National Bureau of Economic Research. He often said to us, doctoral students, “I learn more from you than you from me.” With all due respect, this was BS.

Alberto saw things that none of us saw. Each time I walked out of his office, I had a new research idea in my mind. Entire cohorts of Harvard doctoral students, many of whom today are full professors in the most important universities in the world, have developed the intellectual core of their research in that office. This is not an exaggeration. MIT, Berkeley, Chicago, UCLA, but also our Bocconi University, an institution he loved. The list is really too long.

Alberto’s research started with the problems of interaction between fiscal policies and electoral dynamics in the late 1980s. The analysis of political correspondences in macroeconomic problems had long been ignored because of the difficulty in reconciling the principles of the rationality of the voters in contexts that are sufficiently realistic from an empirical point of view.

In two fundamental works, Alberto solved the problem of “electoral cycles” and paved the way for a new kind of macroeconomics, more sensitive to shocks and political distortions. Fundamental works with Guido Tabellini of Bocconi University, another giant in this area, are from this period.

At the same time, Alberto paved the way for greater attention to the economic dimensions in political sciences, and for many years he was part of both the Department of Economics and the Department of Political Sciences at Harvard. His work with Howard Rosenthal, an internationally renowned political scientist, is a fundamental contribution to the study of “divided government.”

In our meetings, Alberto conveyed an intellectual urgency, a desire to push the frontier on the fronts where we could earn more in terms of collective well-being. Alberto did not like useless technicalities, he did not consider algebra as an end in itself, and he agreed with Paul Samuelson from MIT that “elegance is for tailors,” not economists.

Alberto wanted to go to the heart of the problem and to see the “big picture.” His work on strategic delays in implementing fiscal reforms with Alan Drazen at the University of Maryland in the early 1990s remains a classic, helping us understand where both Argentine defaults and American political gridlocks may come from.

Alesina was not just a macroeconomist. Aristotle’s political animal was the paradigm for Alberto, more so than the homo economicus. His interest in ethnic divisions in the United States and Africa in the late 1990s opened up entire fields of research in local public finance in the United States, in urban economics, and in development economics.

Inequality, opportunity, and growth were at the center of Alberto’s key works in those years, such as his classic work on economic redistribution with Harvard’s Dani Rodrik. Divisions and conflicts over economic policy, decisions between groups and within groups of individuals fascinated Alberto and produced fundamental progress relative to the areas of social choice and public choice who had previously addressed some of those questions. Kenneth Arrow and James Buchanan had both won a Nobel prize for their research in each of those fields.

Alberto’s microeconomic models on social partitions and of nations’ cohesion influenced many students and are still considered to be paradigms of simplicity and intuition from that period. Many doctoral students at the time were lucky enough to participate in those projects, among them Eliana LaFerrara, Romain Wacziarg, and Enrico Spolaore. They eventually became among the most cited European economists in the world. I was one of many students who spent time in that office full of books that I should have read and ice axes. “Northern Italian people”, I thought.

“My best ideas come while I am skiing,” Alberto said to me in the early 2000s. It was not true. They also came during dinner, as in the case of his works with Marios Angeletos at MIT. I was present at that dinner. Alberto had presented one of our articles to MIT and Olivier Blanchard was present as well. Marios had been a student of Alberto’s a few years earlier, and their work on redistribution and equity began with a question that evening.

The best ideas came to Alberto whenever he liked to find one. And it happened often.

In the second half of the 2000s and especially after the 2008 financial crisis, Alberto made fundamental contributions in another area far from the usual priorities of macroeconomics: family economics.

Moreover, he promoted cultural economics, the economics of cultural evolution, also through his mentoring and his group of political economy at the National Bureau of Economic Research. Cultural anthropology, sociology, and psychology appeared frequently both in Alberto’s articles of this period and in his seminars at Cambridge. He fostered new fields of research on gender discrimination and fairness of opportunity for individuals. This contribution is much more valuable than the criticisms he received on social media after the global financial crisis because of his ideas regarding fiscal austerity.

More recently, Alberto was focused on the analysis of cultural values ​​and ideological separation. Until a few days ago, Alberto Alesina pushed the intellectual frontier forward in these areas. His memory, ideas, care, and generosity remain with us, his students, and with his wife, Susan.

Share
Facebook
Twitter
Email
Previous articleGovernments and WHO Changed Covid-19 Policy Based on Suspect Data From Tiny US Company
Next articleCovid-19 and Amazon’s Future: a Webinar With Stacy Mitchell, Steven Kaplan, and Jacob Schlesinger