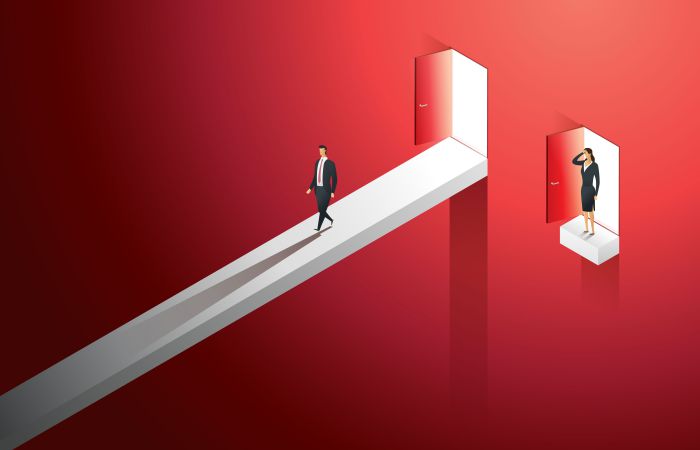 The Editor-in-chief of the Italian news publication Domani shares his concerns about what's been left out of the controversial Twitter Files conversation...
Read more
Research

Women are under-represented in top economics journals. Although they make up 20–30 percent of academic economists, women are only 11 percent of all authors published in top-five journals since 1990, 12 percent since 2000, and 14 percent since 2010 (see Figure 1). Over that same period, there has been very little growth in the number of exclusively female-authored papers; almost no growth in the number of majority female-authored papers; and no meaningful change in the number of mixed-gendered papers with a senior female author.

The only tepid growth that has occurred is largely—if not entirely—due to an increase in the number of published articles by senior men co-authoring with a minority of junior women.1

Several recent papers investigate why. Hengel (2019) finds female-authored papers in top-four economics journals are held to higher writing standards in academic peer review. As a result, their manuscripts are subject to greater scrutiny, spend longer under review and women, in turn, respond by conforming to those standards. Using submissions data from a set of four semi-overlapping journals, Card et al. (2020) find that female-authored papers are higher quality conditional on referee recommendations.

In a new study, we join this research by investigating gender differences in quality conditional on acceptance to a top-five journal. We find that (i) articles authored by men are cited less than articles the same journals publish by women; (ii) men’s citations rise when they co-author with women; and (iii) women’s citations fall while they co-author with men. Under strong—but we believe reasonable—assumptions, these results imply top economics journals hold female-authored papers to higher standards, and, consequently, do not publish the highest quality research. They also suggest that authors of both sexes will be less willing to collaborate with women, all else equal.

The Female Advantage in Citations

Results from our principle analysis are displayed in Figure 2. Pink markers (first panel) represent the average female advantage in citations, conditional on controls.2 Column (1) adjusts for year of publication, journal, co-author count, and authors’ experience at the time an article was written—all factors found in previous research to influence citations, conditional on quality.3 Column (2) adds a control for author reputation at the time citations were collected; it accounts for the impact a stronger reputation later on can have on citations to an author’s earlier work, all else equal. Columns (3)–(5) restrict the data to articles published after 1990. Columns (4) and (5) control for sub-field. Columns (6)–(7) are estimated on the sample of articles published after 2000 and control for journal and year, only.

Everyone’s Citations Rise When They Collaborate with Women

Estimates in Figure 4 are potentially biased by contributions from unobserved co-authors. For example, suppose, hypothetically, that Anna Schwartz, Milton Friedman, and Kenneth Arrow collaborated on one paper while Arrow collaborated with Larry Summers on another. If Friedman’s contribution means Arrow’s article with Schwartz and Friedman is cited more than his article with Summers, then the ratio of female authors on his papers will spuriously correlate with citations unless Friedman’s presence is accounted for.

Consistent with results in Figure 4, we find a senior male author’s work is more highly cited when it is co-authored with a woman: citations increase 60–70 log points when senior male economists co-author with junior women as opposed to junior men.

What Does This Mean?

Assuming citations are not biased in favor of women conditional on quality (as well as included controls), our results suggest female-authored papers published in top economics journals are higher quality than male-authored papers.4

If female-authored submissions are higher quality, then their acceptance rates should be higher as well, accounting for similar controls.5 Although our data cannot directly test this, recent evidence from a set of journals that partially overlaps with our own suggests they aren’t. Other studies of and beyond economics journals reach similar conclusions.

Figures 4 and 5 also rule out consistent same- or opposite-sex complementarities meaningfully contributing to gender differences in quality, conditional on acceptance. The impact of co-authoring with members of the opposite sex would be positive for men and women if they produce higher quality work by collaborating with one another; conversely, both effects should be negative if everybody works better with members of their own sex. Our evidence is not consistent with either story. Instead, we find that the impact of co-authoring with a man is negative for women while the impact of co-authoring with a woman is positive for men. This suggests that women disproportionately contribute to the quality of co-authored work—again, conditional on acceptance—and is consistent with women facing tougher standards in peer review.

Finally, our results indicate that female economists may not be able to correct for higher standards all on their own. Although the fall in women’s citations when they co-author with men suggests adding male co-authors can alleviate higher standards, men also experience a rise in citations when they co-author with women, suggesting co-authorship alone probably cannot eliminate them. And when combined with evidence of the “Matilda effect” in tenure decisions—Heather Sarsons shows that tenure committees discount women’s contributions to mixed-sex co-authored papers—co-authoring with men may have wider negative consequences, as well.

As Becker (1957) has shown, discrimination hurts its victims and its perpetrators. In the presence of complete and perfect markets, harm inflicted on the former is fully absorbed into higher costs for the latter. As a result, bias has no effect on equilibrium outcomes—e.g., women can simply publish their higher quality papers in currently lower-tiered (but non-discriminatory) journals, confident that their actions would lead to an immediate adjustment in journal rankings.

When competition isn’t perfect, however, discrimination interacts with one or more market frictions to prevent those who discriminate from fully internalizing its costs. Consequently, its victims will have to partially bear them. For example, imperfect information about journal rankings may mean tenure and promotion committees’ expectations are slow to adjust to the lower quality of journals that reject too many women. As a result, women (and the men they co-author with) are tenured and promoted at lower rates than they otherwise would be if markets were complete. To the extent that grant committees similarly rely on applicants’ past publication histories to choose between projects, women will also have a harder time funding future work.

Moreover, discrimination undoubtedly distorts authors’ decisions in ways that can further misallocate available resources. Indeed, our own evidence implies male and female economists are better off collaborating with men—all else equal—suggesting authors of both sexes may forgo higher quality co-authoring opportunities with women in order to partner with men.

In economics, we generally approach incomplete markets by proposing policies that try to fix individual imperfections. When the space of market failures is large and each is impossible to eradicate completely, however, policies based on outcomes are sensible alternatives. Not only are they objective and non-punitive, they may also create positive externalities that might not have been achievable using markets alone (see, e.g., Niederle, Segal, and Vesterlund 2013; Besley et al. 2017). For example, if journals clearly signal a determination to publish more female authors, they will likely decrease the relative price of co-authoring with women, encourage better co-author matches and increase the aggregate quality of economic research.

Nevertheless, an adequate understanding of the context in which discrimination occurs is absolutely crucial to responsible policymaking. More research is certainly needed. We hope journals are challenged to address the tougher standards they likely impose on women, willing to support the access and research needed to better understand them and open to whatever policy options most effectively check them.

Becker, Gary. 1957. The Economics of Discrimination. University of Chicago Press.

Card, David, and Stefano DellaVigna. 2017. “What Do Editors Maximize? Evidence from Four Economics Journals.” Review of Economics and Statistics, no. forthcoming.