The Secret Code of Capital and the Origin of Wealth Inequality 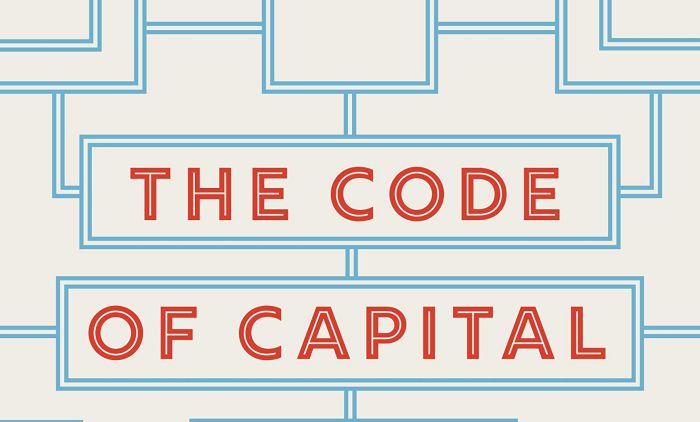 Capital is not a thing, but a social relation enforced by the law and the state. With the right legal coding, any object, claim, or idea can be turned into a wealth- or capital-generating asset. In her new book, Katharina Pistor analyzes the evolution of capital over the past 400 years.

Capital is not a thing, but as Karl Marx asserted, it is a social relation. Marx and his followers have identified the relation between capital and labor as critical. Ownership over the means of production allows capitalists to extract surplus from labor, which they can feed back into the production and surplus creation process, or take out for consumption. Law is part of this account, but it is not central. Thorstein Veblen and John Commons gave law a much more central role in explaining capitalism, highlighting the role of courts and their ability to adapt, and even alter, the meaning of law.

My new book The Code of Capital takes these insights and develops it into a framework for analyzing the evolution of capital over the past 400 years. Capital is indeed a social relation, but it is mediated by the state’s coercive powers, which have been institutionalized as law. Critically, private parties can avail themselves of the state’s coercive powers by using the law for organizing their social and economic relations with one another and they enjoy considerable flexibility in doing so. Courts did play a critical role in the early evolution of capital during the land enclosure movement in England and subsequently in recognizing the legal protections landowners sought against their creditors. Today, though, private attorneys have taken center stage. They adapt the law to new assets and create new assets through legal coding. They have become the true masters of the code of capital.

The basic argument of the book is simple: With the right legal coding any object, claim or idea can be turned into a wealth generating, or capital, asset. The key attributes of capital are priority, durability, universality, and convertibility, and with three out of these four, an asset has a much greater propensity to generate wealth than others. Priority means that asset holders enjoy stronger rights over others; these rights can be extended in time, lending them durability and allowing capital can grow; priority and durability can be extended and bind others, lending these legal privileges universality; and last but not least, asset holders may be given an option to convert their assets to lock in past gains.

Only a handful of legal institutions are needed to turn a simple asset into capital. These modules of the code are property, collateral, corporate, trust, bankruptcy, and contract law. Property and collateral law are critical for ranking claims and creating priority rights. Corporate and trust law create legal shields that protect asset pools from the personal creditors of their owners, thus making them durable. Bankruptcy law creates priority rights for creditors against the remaining assets of the debtor; it also sometimes exempts certain assets from the ordinary workings of bankruptcy procedures, thus making them more durable. Contract law can be used to mimic these features. Last but not least, by granting access to its law enforcement apparatus, the state confers universality on the legal privileges the holders of capital enjoy.

The book applies this framework to the coding of assets that have characterized the evolution of capitalism over the past centuries: First came land, then firms and debt; since the late twentieth century, intangibles—intellectual property rights and financial assets—have dominated other capital assets. The book devotes a chapter to each of these assets, using real-world cases and tracing the origins of the legal modules. The analysis shows that far from being a fixed feature, law is malleable. The contents and meaning of property rights and collateral, the rights and obligations of trustees, creditors and shareholders is altered at the margin all the time, and in this process, new capital assets are being created.

These changes notwithstanding, the basic modules of the code of capital and the legal entitlements they confer on capital’s holders have remained remarkably stable. Property rights give patent holders a better right over anybody else just as they did for land and chattel. The same legal device that landowners in England used to protect their family estates from their personal creditors, the trust, has been used for centuries to protect assets from the tax authorities, and today it plays a central role as “special purpose vehicle” in shielding assets from risk for securitization structures or derivatives. And just as English landowners were able to get a pass from the ordinary rules of bankruptcy for real estate, so have investors obtained bankruptcy “safe harbor” status for derivative or repo claims against a counterparty that finds itself in bankruptcy.

Property, collateral, trust, corporate, bankruptcy, and contract law are all part of domestic legal orders and they often vary from country to country. One might conjecture that for global capitalism to work, we would need a global state and a global system of private, yet neither exists.

The puzzle can be resolved by taking a closer look at a body of law that facilitates law’s portability from one jurisdiction to another. These “conflict-of-law rules” are part of the domestic legal system; they guide a judge or attorney, which legal system should be applied when more than one is in play. For contracts, parties can freely choose their legal system according to most countries’ conflict-of-law rules. This principle has meanwhile been extended to corporate law. For property rights, sovereign states used to have a monopoly over all assets located on their territory, but for financial assets that lack a location, they have lost it.

Bankruptcy law is the only module of the code of capital that is mandatory local law, but well-organized private actors have lobbied hard to ensure that most countries adapted their bankruptcy statutes to their contracts.

Using the lens of the code of capital, global capitalism is not a system that is detached from states or state law. Instead, it is rooted in select legal systems that have accommodated capital for centuries and that today are the home not only to the major players in global finance, but also the 100 top global law firms. English and New York state law dominates the coding of globally traded capital.

These two jurisdictions are the rule makers for global capital. Most other jurisdictions will recognize and enforce the legal rights they create; they are therefore rule takers. By readily recognizing and enforcing foreign law in their courts, they extend universality way beyond the territory of the country to provide the critical modules of the code.

In short, capital and the system it has given its name was not designed by anybody in a coherent fashion, but neither can it be described as the product of natural evolution.

Capital assets have been placed on legal steroids and the task to pick and choose the assets that are slated as capital and apply the steroids to them has largely been left to the holders of capital and their lawyers. They could not have done this without state power, but they are no longer dependent on a single state. All they need are some sovereign states that provide the legal modules, and others that are willing to recognize them as law and enforce them. There is no absolute guarantee that courts, foreign or domestic will always do so.

However, even if a court should strike down a patent or deny enforceability of coding strategy that may have been just too creative, there is still a lot of wealth to be made in the meantime. And critically, somebody must challenge the coding strategy and incur the costs for doing so. After all, private law is policed by the state only at the margins when it intersects with criminal law (theft or fraud) or when it violates bright-line regulation. In the realm of private law, the major policing function is left to other private parties, who are often ill informed and for whom the costs of law enforcement may outweigh the benefits.

Capital holders therefore have an important first-mover advantage, and with sophisticated master coders at their side, they have taken advantage of it.

Katharina Pistor is the Edwin B. Parker Professor of Comparative Law at Columbia Law School and Director of the Law School’s Center on Global Legal Transformation. She is the author of The Code of Capital (Princeton University Press)