Populist Plutocrats as a Political Phenomenon 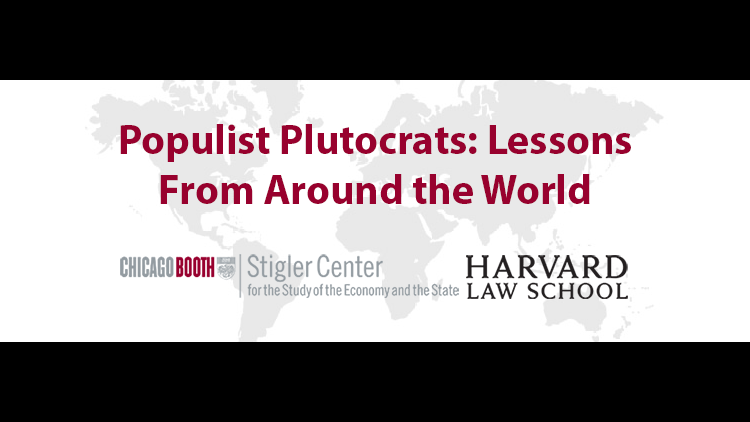 The early-1980s Posner-Stigler memorandum to incoming president Reagan’s transition team is interesting for a host of reasons, but most of all in...
Read more
News

How can a rich man successfully pose as a representative of the poor and the disenfranchised and become the leader of a populist movement? Harvard Law School and the Stigler Center are organizing a conference that explores the resemblances between Donald Trump and other populist plutocrats around the world.

On the verge of the 2001 Italian parliamentary elections, Silvio Berlusconi, then-candidate for Prime Minister, presented his campaign slogans to his entourage. The main one was “un presidente lavoratore” (a blue-collar prime minister). Even among his most consummated acolytes many jaws dropped: how could the richest man in Italy pretend to be a blue-collar worker without becoming a laughing stock, let alone win the election? As usual, Berlusconi ignored his counselors’ advice and won by a landslide.

This anecdote raises a question that has puzzled many political scientists: how can a rich man successfully pose as representative of the poor and disenfranchised and become the leader of a populist movement? Until last November, many Americans thought that this could only happen in Italy—but not anymore. While Donald Trump’s success may be unprecedented in modern U.S. history, it is not unprecedented in the modern world at large. Many other democracies have had leaders who could be described as populist plutocrats. Besides Silvio Berlusconi, there is certainly Thaksin Shinawatra, the telecommunications mogul who served as Thailand’s Prime Minister from 2001-2006, and Joseph Estrada, a former action movie star, who was President of the Philippines from 1988-2001. In addition to these very close parallels, there are many other leaders who share some important characteristics with the populist plutocrat paradigm: including Alberto Fujimori in Peru; Jacob Zuma in South Africa; and pretty much the entire Peronist movement, from Juan Peron himself through Nestor and Christina Kirchner, in Argentina; finishing with Vladimir Putin in Russia.

These eerie resemblances have not gone unremarked in U.S. media coverage of the Trump Administration (see, for example, here, here, here, and here), but there has not yet been much of a sustained attempt to understand populist plutocracy as a broader phenomenon. For this purpose, Harvard Law School and the Stigler Center at Chicago Booth are organizing a conference on this theme on September 23, 2017. The conference will provide an opportunity for a predominantly American audience to learn from experts from around the world, who will draw on their own experience and expertise to provide a distinct perspective on the challenges the United States is currently facing.

In the conference we will ask these experts, from different backgrounds and different parts of the world, to address a number of important questions. Are populist plutocrats random accidents of democracies or are they the manifestation of deeper economic and social problems of the countries they emerge in? If the latter, what are those underlying economic and social problems? To what extent did the media play a role in their success, either by adulating or demonizing them, but always giving them a disproportionate amount of coverage? To what extent are populist plutocrats a reaction to an intellectual elite that proclaims itself “for the people” but is more distant from people’s needs and aspirations than the populist plutocrats themselves? How do they govern, and are they notably different from other types of leaders who espouse similar ideological or policy positions? What strategies are most effective in resisting and combating leaders who combine populist rhetoric with strong tendencies toward cronyism and corruption?

Last but not least, what are the long-term consequences for countries where these sorts of political movements have achieved sustained political success? Some claim that Berlusconi’s long reign affected the values and attitudes of the Italian people, especially towards women (see for example the movie Videocracy). Is this true? Is this the case for other populist plutocracies? What are the long-term risks for the United States? And what can be done to minimize them?

The conference is open to the public and will be live-streamed. More information about the conference, as well as a registration page, is available here.